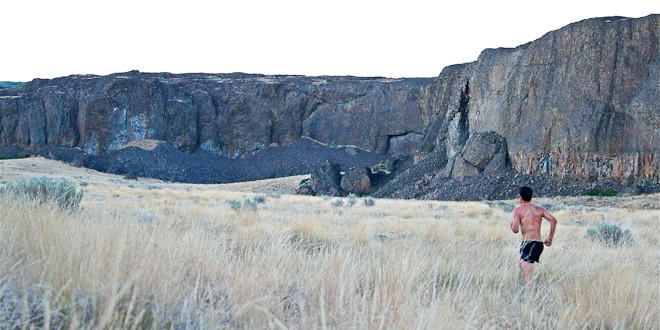 My eyes focused solely on the next step – to glance away could mean a sprained ankle, or worse, a tumble off the goat trail carved into the canyon wall.

I had spent much of the last mile navigating the vertical canyon walls at breakneck speeds as it dwindled to nothing more than a rutted, rock-strewn cattle trail high above the Palisades canyon in Washington state. The flat plateau of sage-step country rose above  small, lush farming plots fanned out below as far as the eye could see. There’s no shade in this country. It’s an arid land of jagged basalt rock with a texture suggesting it may, in fact, be boiling, or at least it emits enough heat to make it seem possible. Cheatgrass, a spiky, widespread invasive species to the Columbia Basin, sneaks its way farther into my socks and shoe liner with every step, delivering micro-jabbing sensations every few yards.

The temperature is well above the 90-degree mark. Humidity from nearby thunderstorms clings to us, as I – and my like-minded running partners Scott Sundberg and Jared Reyes – drop further into the canyon. This run, or rather this “stress test,” is more than just a masochistic reaction to the heat. It’s a chance to once again feel free of the constraints of designated trails and roads. We are here to enjoy the sage country and remember why we chose trail running as a hobby. It’s something every trail runner should try.

Washington State offers runners ample room to stretch their legs on public ground. You need look no further than the vast tracks of land managed by Washington State’s Department of Natural Resources, Department of Fish and Wildlife and federal agencies like the Bureau of Land Management (BLM). According to the BLM, more than 425,000 acres of land are open to public access in the southeastern region of Washington alone. Privately-owned land stipulated for public use also exists, with much of the access going unmentioned by agencies.

At the moment, though, we set treads down on a patchwork of State Trust, BLM, DNR and privately-owned property with access rights granted to the public. The Palisades canyon area is rimmed with faded yellow and red signage, private property markers half-shot-away by gunfire and miles of nothing. 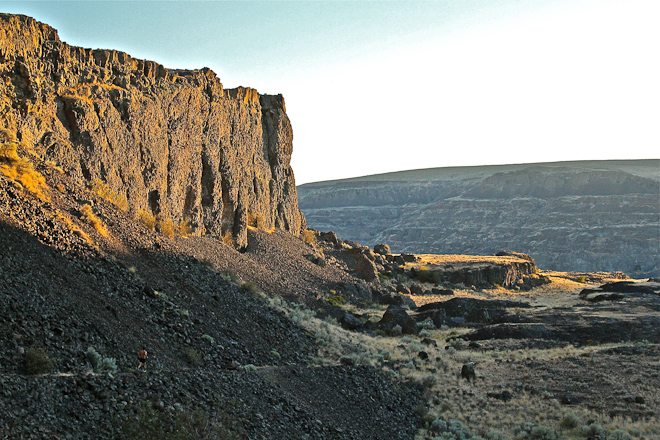 Leading the running pack is Jared Reyes, a 24-year-old eastern Washington resident and former collegiate track star, who bounds effortlessly across the rutted cow trails that crisscross the area. His path is determined by his speed, and with the flat plateau spanning for miles, he pushes the pace faster and faster. Reyes juke-moves his way from trail to trail, often times carving his own path through cheatgrass and sage swaths.

“You ready for a surge?” Reyes says over his shoulder. His idea of a good mid-run competition is to drag fellow trail-junkie Scott Sundberg and myself into a high-speed, high-risk dogfight on the winding trail. “Pain is temporary,” he says as we run through rising heat waves.

Sage country runners – even veteran athletes like Reyes – often face more than the typical trailside hazards. Western rattlesnakes, strains and sprains and pin-cushioned feet from cheatgrass are often the noticeable physical ailments associated with open-country jaunts, but the most dangerous – and prevalent – ailment occurs within.

The Heat of the Moment

At one hundred and five degrees the human body begins to cook. Beyond that temperature, everything the body does is geared toward shutting itself down. Radiant heat from the surrounding environment, direct sunlight overhead, elevated heart rate, and a lack of water make for a potentially deadly combination called hyperthermia. Most sage country runners are on borrowed time as soon as they kick their first rock, since the average runner typically squeezes out an average of 1.2 liters per hour, according to a Jake Emmett, Ph. D., in his report on marathoner physiology. That’s a far cry from a typical runner’s absorption of 600 milliliters of water per hour during exercise.

It’s important to know your water limits, and what resources are available in the area. Large swaths of western sage country land are open to cattle grazing and feature circular cattle troughs that may look clear and cool.  But looks can be deceiving.

Waterborne diseases like giardia and cryptosporidiosis, or crypto for short, are transferrable from animal to human, and can be debilitating. Such diseases are transferred when contaminated animal feces come in contact with water. Filtering water, and the use of ultraviolet water treatment options, is not effective against crypto, according to the Center for Disease Control. Knowing where safe water resources are during a long sage country run is essential. 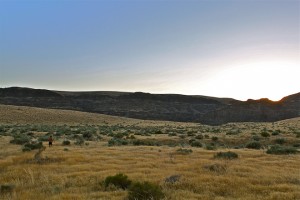 Reyes began to pull away on a particularly brutal incline where the flat trail ran headlong into 2,200 vertical feet of elevation gain in less than two miles. The steep ravine trail cut into the hillside, sheltering the only scrub brush and trickle of water for miles. It also sheltered an all-too-common sage country hazard: the western rattlesnake.

Coiled beneath the sagebrush, the snake resembled a small cow patty on the trail. As we rounded a bend in the trail we found Reyes, eyes wide with shock, as he held his hands high, signaling us to stop in our tracks. He doubled over, shaking his head, knowing how close he had come to catastrophe as he mistakenly nudged the coiled snake mid-stride.

Miles form the trailhead, Reyes had good reason to be worried.  An elevated heart rate and few resources at-hand create a serious danger for the backcountry runner.

Safety in snake country boils down to focusing on foot placement and avoiding likely areas where snakes congregate – near water resources that are home to prey. If bitten, it is important to identify the species of snake, find a cool, shaded area to sit, administer pressure above the bite while attempting to reduce your heart rate, and send a partner for help.

The sage country of eastern Washington is peppered with amazing running terrain open to the public. Plan ahead and consult state and federal websites for listings and maps of the vast expanses of trails and off-trail adventures on public land.