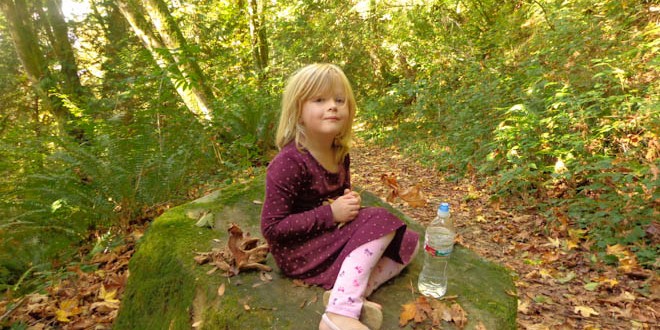 The partially occluded, but dramatic view of Mt. Shuksan catches me by surprise.

The hike thus far had been shrouded by the dense second-growth forest, squelching any hope of finding any inspiring mountain views. I point out the view to my daughter Sophia, who has followed me to the river to get water. “Ooh, pretty,” she says, and quickly refocuses, “I’ll help you.” She has been on my heels the entire trip, wanting to help me do anything and everything, which has me ecstatic. Her help will cause the simplest chores to take three times longer, but I try to be patient.

This is Sophia’s first backpacking trip. At 3 ½ (or 3.5 as she likes to tell people) she is impressionable enough to get hooked. Her mom tells me she just wants to spend time with me, especially after I have been away from home the past two weeks on my job fighting forest fires. I don’t believe her. Not because it isn’t a plausible explanation. I don’t believe her because I don’t want to. I want to believe that Sophia is so enthusiastic about this trip because she has the bug. I want to think that she will be drawn to wild places as much as I am, and ultimately will be my companion on more of these trips.

This particular trip, about a mile or so up the North Fork of the Nooksack River, was hastily thrown together. With only one short night available, this trip had to be close to our home in Bellingham (with cell-phone reception to check in on the teenager at home) and within the hiking abilities of a 3.5 year old. Up to the point that Shuksan made its cameo appearance, I had been disappointed with my choice. The entire hike had taken place in the aforementioned dull second-growth forest.

For both Sophia and my wife, Naomi (also on her first backpacking trip), I wanted them to experience the splendor of what our region has to offer: pristine old-growth forests, regal glaciated peaks, wild rivers. When I suddenly found myself in the midst of my more optimistic expectations for the day, I was reminded that even our third-rate destinations in Northwest Washington attract people from across the country and across our borders as well.

I have plans to take Sophia and Naomi to some of my favorite first-class backpacking sites soon: old-growth cedar groves, secret backcountry fishing holes, terrifyingly majestic mountain views, etc… For many parents, confined to less blessed locations, their challenge may be to get their kids out into the wilderness. My challenge in parenting Sophia, I suspect, may be in keeping her from taking what we have for granted.

My friend, Brian, who moved to Bellingham from Iowa as an adult, likes to tell the story of his first winter here – how locals bragged to him about the splendor of Mt. Baker, how it was probably unlike anything he had ever seen. One day when the chronic low cloud-cover partially lifted, he went to the place he had been told would offer a view of the mountain. He was overwhelmed by what he saw. He quickly phoned the friend who had given him the tip on the viewing location and raved about the awe-inspiring vision he had seen. “What?” his friend replied. “You can’t see Mt. Baker today. The cloud-cover is too low.” When Brian was insistent that he had seen the mountain, his friend went with him to verify. When he was informed that he was looking at Stewart Mountain, the first and lowest of the foothills between Lake Whatcom and Mt. Baker, Brian was embarrassed but intrigued at the wonders that still lay in front of him.

Later that spring, when he saw the real Mt. Baker, Brian’s response was a sublime, understated “Oh. I see.” My task in raising Sophia will be to instill an Iowa sense of wonder in a Bellingham girl.

Today, on a day hike to Clayton beach in Larrabee State Park, Sophia tried to encourage her older brother (who hadn’t wanted to go) by promising, with all earnestness, to “find him a dead sea cucumber.” On the hike in, as I tried to shoo her along to the destination, she stopped to pick up a folded-up, half-rotten maple leaf – a rare and precious treasure in her mind, and shrieked with glee when she found the perfect wild blackberry. She would have picked every one had I not once again had to hurry her along.

Although the search for dead sea cucumbers ended in vain, we found seaweed to throw into the water, rocks and logs to balance on, and a mangy, partially decayed, half-flattened, “perfect” seagull feather – all priceless and mysterious treasures in her mind. Had I been more observant, I would have noticed the ironic alchemy – how the 3.5 year old’s attention span (normally so easily distracted) had become so much more focused than the adult’s.

It wasn’t until we got home that I realized that perhaps my parenting task isn’t to teach Sophia anything, but rather to avoid un-teaching the appreciation of creation that has already been embedded in her heart. While I am busy trying to hurry her along the trail and make her miss out on appreciating the fingerprints of the creator in each dead leaf, or from exploring the wonder in each tide pool, perhaps it is she who is trying to teach me.