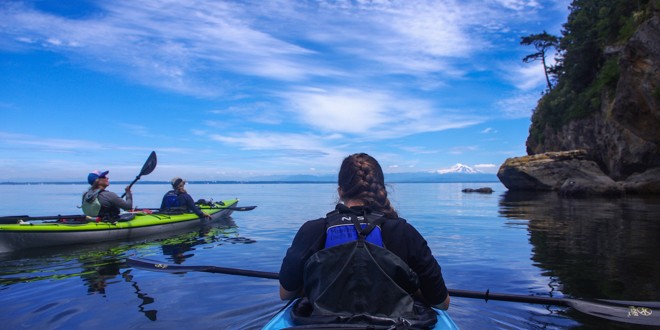 Springtime on the Salish Sea: Paddling the San Juan Islands

The flat two-mile crossing was anything but notorious. I was almost disappointed.

We’d dragged our kayaks onto the ferry in Anacortes at oh-dark-hundred, disembarked at the Orcas Island terminal and waited for our transportation, loaded boats and gear into a van that took us across the island through Eastsound, unloaded our boats and gear at Terrill Beach, and then began packing for the paddle. That strip of water in front of us was the final hurdle before our destination, Sucia Island.

We were a party of six sea kayakers. Five of us were experienced in San Juan waters. The sixth was Joe, a college newbie brimming with biological bravado. I’d warned him about the island’s capricious water/weather combinations but the blue sky overhead made a mockery of my words. Joe faced the channel, arms extended in welcome and exclaimed, “This is perfect! Even if the wind comes up it’s still perfect!”

Seattle meteorologist Cliff Mass, an expert on Northwest climate, gives scientific credence to what veteran Island paddlers know from experience. “If any place has localized weather features…it is there [the San Juans]. The complex combination of terrain and water causes large weather variations. Wind variations are huge.”

We slid our loaded boats into the water and arranged ourselves next to each other as though we were starting a race. I scooted in next to Joe. “Joe,” I smiled, “Welcome to San Juan Island paddling.” Then we pushed into the channel.

There are 172 named islands and reefs (depending on the tide) comprising the San Juan Island Archipelago. Together they offer sea kayakers a rich diversity of paddling routes and destinations that never fail to satisfy. So why aren’t the waterways crawling with kayakers?

It’s not that simple, cautioned Kristi Kucera, owner of Bellingham-based Moondance Sea Kayak Adventures. “The water from the Strait of Juan De Fuca pours in and out directly from the Pacific Ocean. The first islands it encounters are the southwestern San Juans.” (That helps explain the tide races through Cattle Pass.)

“The islands average an 11-foot tidal exchange,” she continued. Constrictions force the water to move even faster and push harder. Some constrictions are obvious such as the gap between two islands. Others are hidden, like reefs just under the surface. “Any time you have a big body of water squeezing into a smaller area, you’ll experience dynamic conditions.” “Dynamic” is how experts describe water that’s gnarly, chaotic, or just plain horrifying.

Still, it’s really all about preparation. Tides and currents are well documented, rip locations and reefs are marked on charts. Even ferry traffic is predictable. If you have solid boat handling skills, plan properly, and make smart, conservative decisions, you’ll enjoy yourself. Usually.

The four biggest islands– Orcas, Shaw, San Juan, and Lopez –.are serviced by the Washington State Ferry system and provide excellent starting points for any paddling journey. Locals like me tend to take them in stride. We forget that National Geographic Magazine included our backyard in their list of the world’s best 100 adventure travel destinations.

At fifty-seven square miles and 70 miles of shoreline, Orcas is the largest and most visually spectacular of the islands. It’s rather horseshoe-shaped, practically bisected from the south by East Sound harbor, which cuts eight miles deep into the interior and is over a mile wide. Ribbons of road wind through rural, hilly terrain dotted with old farmhouses, grazing cows and sheep, orchards, barns, and the occasional village. Mt. Constitution on the wooded east side boasts the highest point in the archipelago at 2400 feet with spectacular 360-degree views.

Multi-day circumnavigations of Orcas are popular among paddlers. Depending on tides and currents, paddlers have several take-out options available, some with camping. The ferry terminal can be a good place to start. Doe Bay on the east side is enjoyed for its causal sensibilities and clothing-optional hot springs. North Beach is a wide graveled shoreline with easy access to Eastsound and parking close by. The picturesque community of Deer Harbor is as pretty as it is convenient. There’s a wide sandy beach to prep your boat and a short 2.5-mile paddle to one of the San Juan’s most popular boating destinations, Jones Island.

Jones Island is 188 square acres of well managed state park land. It has a dock for motor boats, a sandy beach, 24 primitive campsites including two on the Cascadia Marine Trail, running water in the summer, two lawn areas for picnics and a bounty of tame deer and over-stimulated raccoons. (Keep your food well protected.) I’ve camped there several times. It’s a perfect jumping off point to tour the rocky Wasp Islands as well as the Nature Conservancy’s fragile Yellow Island. Look for barking seals, bright orange and purple starfish, bald eagles, and lots of sweet spots to noodle around.

San Juan Island is the county seat and boasts the biggest population, the biggest “city,” and the greatest concentration of  bars. Friday Harbor is the island hub with its restaurants, art galleries, quaint shopping malls, museum, marina and ferry terminal. Kayakers usually forgo the crowds, opting instead for San Juan Island County Park on the west side of the island. The park borders busy Haro Strait, a main thoroughfare for Vancouver Island ship traffic, freighters running to and from Seattle, Puget Sound’s three resident Orca pods, and occasional transient whales. Panoramic western views of Vancouver Island and the Olympic Peninsula add to the area’s dazzle.

I was keen to paddle from Smallpox Bay to Deadman Preserve, just north of San Juan County park. The disturbing names given to these otherwise scenic locales have a historic foundation. Prior to European colonization, the north end of San Juan island was home to a vital population of Lummi Indians. When the natives encountered the first European explorers, they were exposed to diseases and fevers for which they had no natural immunity. The worst of these was smallpox.

Smallpox Bay gets its name from a time when the Lummis, riddled with smallpox, tried to cool their fevers by jumping into the bay’s icy water. They all died from illness or the hypothermia resulting from their futile efforts to find relief. The population was decimated.

Deadman Preserve has an equally heinous story attached to it. In the late 1880’s pirates smuggled Chinese immigrants by ship to serve as cheap labor. Whenever a customs official approached a pirate ship, the ship captain threw his hapless cargo into the water where they drowned. Their ruined bodies eventually washed up on the 1700 ft. gravel beach at Deadman Preserve.

The preserve is a total of 20 acres with trails that lead into the adjacent Lime Kiln Point State Park, thankfully named for something other than tragedy. At Lime Kiln you can lift your spirits with sightings of Minke whales, orcas, porpoises, seals, sea lions, and otters. Picturesque Lime Kiln Lighthouse is one of 19 lighthouses scattered throughout the San Juan archipelago.

Fiercely private Shaw Island is the smallest of the mighty four at almost 8 square miles. It offers one small county park as its only public campground (unless you paddle out to tiny Blind Island with its four campsites). The 250 residents value their seclusion and the private property signs are no joke. That said, Cedar Rock just west of the county park is a biological preserve where the public is actually encouraged to walk and paddle. Don’t get too excited, though. It’s small.

Despite the lack of take-outs, Shaw is still lovely to circumnavigate. Because it’s surrounded by Orcas, San Juan and Lopez Islands, paddlers can approach from any number of locations. Routes must be carefully timed to coincide with the currents, particularly when nearing the southern shoreline.

Shaw has enjoyed several notable residents (can you say Bill Gates?).  Best known are the eight resident Benedictine nuns who tend one of the island’s last working farms. For a nominal donation, the nuns at “Our Lady of the Rock” Monastery offer guests simple organic meals and comfortable accommodations. Many a book has been written there.

Lopez Island, with a population of a few thousand laid-back souls, is known for its fertile valley, gentle topography, and bike-friendly roads. It’s the kind of place where everyone waves at everyone else. The rural landscape is a loose checkerboard of small farms and houses. The island is almost 30 square miles with 63 miles of coastline. Paddlers who launch from Anacortes to cross busy Rosario Strait will often make Lopez their first stop.

Circumnavigating “the friendly isle” is a fun day trip. Visitors will often see eagles and other birds of prey, sea lions, seals, porpoises, and jellyfish. The island is also home to thousands of bunnies. Paddlers are welcome to use several coastal put-ins including Odlin Park, Hunter Bay, Mud Bay, Spencer Spit and Agate Beach. From Lopez, it’s not far to Orcas or Shaw; however, care must be taken when crossing to and from the island, especially at the southern end where the water moves fast and builds waves.

Speaking of waves, my weekend paddle to Sucia ended up a classic example of San Juan unpredictability. We were paddling easily, ferrying to offset the current when the wind picked up in opposition. With the added constriction of Parker Reef in the middle of the channel, what started as a smooth crossing transformed into a sea of short sharp waves hitting every which way. Joe’s face morphed from a smile into a rictus. He was clearly in trouble so I battled over to him and motioned to raft up. He grabbed at my cockpit and held on tight, slamming me sideways against his kayak. “Someday you’ll think this is fun!” I yelled.

After we settled into camp, all of us debriefed around the fire pit. “I thought I knew what to expect,” he said. “I’ve practiced a lot but when the time came I just froze up.”

“It’s a learning curve,” I said. “To paddle crazy water, you have to practice in crazy conditions with lots friends to help you out.” (I’m not expert enough to use the term “dynamic.”)

“We’ll head out when its slack and play as the current builds,” I said. “Maybe we’ll get a little breeze to make things more entertaining.”

“Entertaining,” he muttered, poking a stick in the fire.

The air ruffled through the trees, fragrant with sea and pine. Lights twinkled across the water toward Bellingham, Orcas Island, and distant Canada. I stood up and patted him on the shoulder.

“Welcome to paddling the San Juans, Joe,” I said.

“You said that when we started this afternoon.”

“Yeah,” I smiled. “But this time you understand what I’m talking about.”

Get Ready, Get Set…

This assumes that paddlers have the resources necessary to research and properly prepare a kayak trip plan.

Tide races are the result of fast moving tidal exchanges usually through constrictions or over reefs. They can build up from nothing into a chaos of standing waves, breaking waves, and waves crashing into each other. You’ll sometimes see kayakers practicing their skills in tide races at Cattle Pass and Obstruction Pass.

A rip can develop when two opposing currents rub up next to each other. The friction creates a line of whitewater that can vary in width and drama. Crossing the tide rip requires skills similar to those used by whitewater kayakers when crossing eddy lines. Tide rips come and go throughout the San Juans. With two daily ebbs and floods, there is no loss of opportunity to find them. 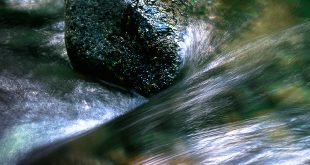