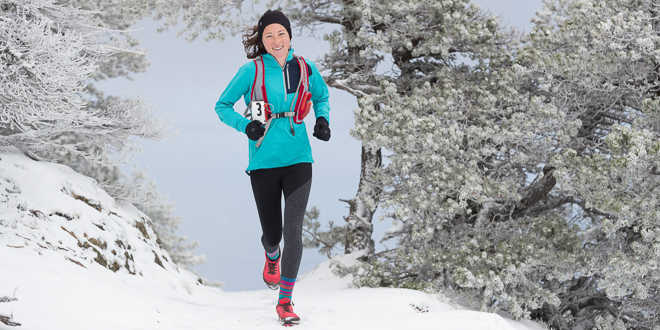 For the past five years, my husband, Nick, and I have made every excuse to visit the Pacific Northwest.

In 2014, we ran the Sea to Summit Trail on British Columbia’s North Shore and shopped for ripe peaches and sun-warmed tomatoes at the Bellingham Farmer’s Market. In 2015 we hiked the West Coast Trail, then I crewed for Nick when he ran the Fat Dog 120, an ultra marathon in Manning Park, B.C. during the stormiest year race organizers had ever seen. In 2016 we island-hopped around British Columbia’s Gulf Islands, and in 2017, we were so eager to come back that we signed up for a 100-mile race on Orcas Island—in February.

To be honest, running a 100-mile race during a Washington winter didn’t seem like the best choice. The average temperature hovers uncomfortably close to freezing, daylight hours extend from 7:30 a.m. to just after 5 p.m.—a far cry from the 16 hours of daylight during the summer solstice—and tights, a long-sleeve shirt, gloves, shin-high socks, and a jacket are just the start of what you’ll probably need to wear. To make matters worse, we were coming from San Diego where the average year-round temperature is a mild 70°F. I hadn’t worn pants for several months and certainly not when running.

Despite it all, we signed up to enter the race.The anticipation of that salty smell of coastal brine and dark, pungent forests was too alluring and the chance to experience seasons—something different than San Diego’s perpetual summer—seemed too good to miss.

“Do you really think we should do this?” Nick questioned one night as we sat in front of my laptop, the website open to Ultrasignup. The header for the race’s description was a concise and appealing “Island Magic.”

“Why not?” I said. “It’s another chance to get back to the northwest.” He grinned, which meant that I wasn’t the only crazy one.

On a blustery Friday morning, Nick and I flew into Seattle and then drove to Anacortes where we waited for the Orcas Island ferry. We met my dad, who had driven down from his home in Vancouver, B.C. As the ferry approached the harbor, I nestled my chin into my scarf and hoped for warmer weather. Seagulls flew in lazy circles above our heads and a seal popped out from the gray-green surface of the water, its eyes round and vacant.

“I can’t wait for the island,” I replied.

Despite growing up in nearby White Rock, British Columbia, I had spent most of my time on Canadian islands like Salt Spring and Galiano; the San Juan Islands were entirely new to me.

Once aboard the ferry, we braved the windy deck just long enough to take pictures of Orcas coming into view. The island is easily identified by its horseshoe-shaped profile, divided by the East Sound inlet. To the east is Orcas’ highest point, Mt. Constitution. I looked on anxiously—this would be the highest point of the race, and one that we would reach four times on the 25-mile long loop course. Those who ventured to the very top of the venerable tower at its summit every cycle would be eligible for a bonus award. I imagined how my legs might feel 80 miles into the race: would I still be climbing those stone steps?

While some assume that Orcas Island is named for the southern resident killer whales that make their summer home in the surrounding waters, the name actually comes from the viceroy of Mexico, a man with 13 names: Don Juan Vincente de Guemes Pacheco Padilla Horcasitas y Aguayo Conde de Revilla Gigedo. Thankfully, only Horcasitas was used in the naming of the island.

At Deer Harbor, we unloaded our bags and made a quick stop at the Orcas Food Co-op to pick up some last-minute supplies and snacks for the race. From there, we made the 10-minute drive to the Rosario Resort & Spa, where we’d booked a room—a pre- and post-race treat. The resort sits just outside of Moran State Park, the 5,500-acre park where the Orcas Island 100 would take place the following morning. After dropping off our bags, we hurried over to the pre-race meeting where Race Director, James Varner, and his team at Rainshadow Running explained everything we needed to know.

Food? Plenty of it.

How to stay warm? No cotton, lots of layers, and keep moving… 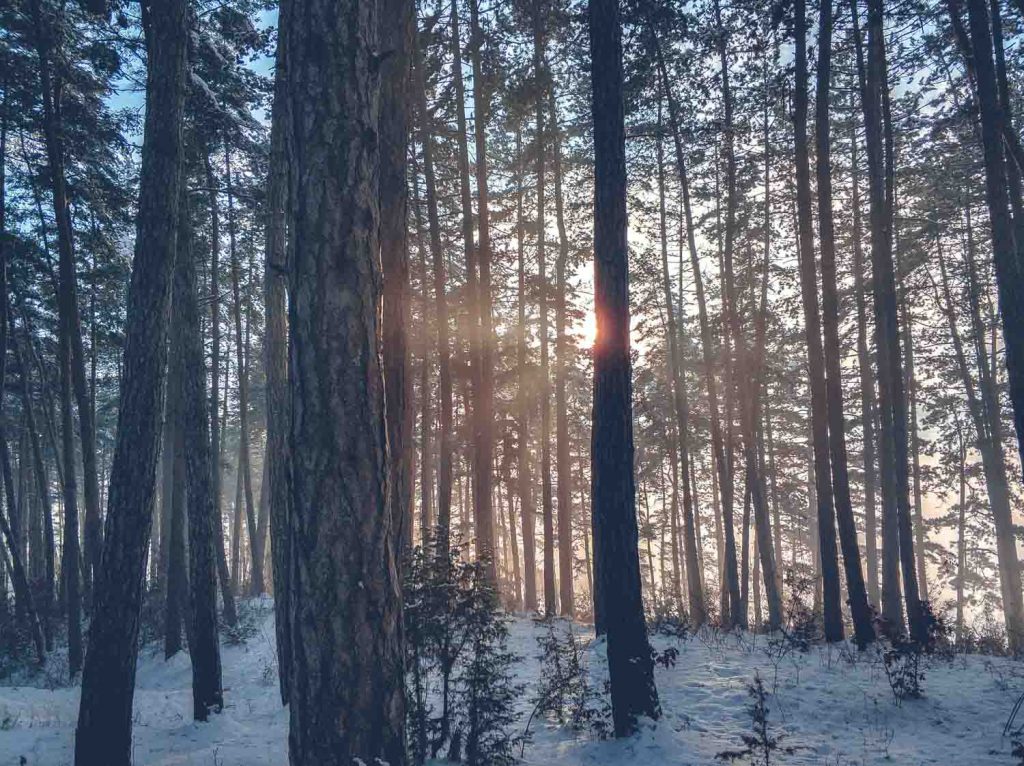 Back at the resort, we ate a quick meal and then settled in for as much sleep as we could get. As sunrise dawned soupy grey, I slid into thick black tights, a long-sleeve shirt, a fleece, long wool socks, and a black headband that I wore around my ears, already reddened from the frigid air. I was nervous, as was Nick, despite his long history of impressive ultra distance finishes: Badwater-135, Barkley Marathons, and Arrowhead 135, among many others. Nick had been in rough conditions, facing 130° heat and -40°cold, but the closest I’d been to exposed cold was taking skiing lessons on Grouse Mountain or snowshoeing at Mt. Seymour on Vancouver’s North Shore. Moreover, this was only my third 100-miler, which might sound like a solid resume until you consider that this race would feature 26,000 feet of climbing.

“So you’re going to have fun the whole time, right?” My dad asked me as he tried to place a toque on my head. I gently took it off and assured him I’d have fun—most of the time.

Just before 8 a.m., James gathered 57 anxious runners. Nick gave me a quick kiss and we wished each other good races; I knew that this would be the last I’d see of him that day.

Within minutes we were off. I glanced once at the long climb ahead then kept my head down. I’d get through this one step at a time.

Due to the steepness of the first climb, most runners decided to power hike but I continued to run, figuring I’d keep warm by doing so. I reached Little Summit, the top of the first climb, then quickly headed down the technical downhill to the first, then second, aid stations. The forest was intimate here with thick-barked Douglas firs and spongy green moss that had been dusted with a layer of snow. Soon I found myself next to another female runner and, after introducing ourselves, I learned that she was just two years older than me; we were the youngest runners on course. I had the feeling we’d be spending the next 85 miles together.

Katie and I held a similar pace and soon enough we were through the third aid station and beginning the toughest climb of the course: Powerline. I’ve always loved climbing, and it’s typically my strength in a race, but I had greatly underestimated both the length and grade of this section. The single track opened onto double track that continued up and up and up, until I looked back and could see islands far below me. Even then we weren’t done with the climb. Katie and I hiked up most of the way together, until the trail finally ended and began an annoying descent through snowy single track once more. Finally the descent concluded with a bridge and we were switchbacking our way up the backside of Mt. Constitution.

“Tower?” I asked Katie at the top of Constitution. I needn’t have asked. We both headed straight up the steps to where an expansive view awaited us at the top. From here, we could see the surrounding islands and Mt. Baker, glistening like a crystal snow globe in the distance. We hurried down the switchbacking trail back to the start: the end of our first loop. Loops two and three would go equally as well, with only minor issues because I downed too many cups of coffee in an effort to stay awake during the pre-dawn hours. Every time Katie and I climbed the tower, one of the coldest parts of the course, I was surprised at just how well my body was regulating the temperature; there was no need to have worried quite so much about the weather. In fact, a winter race had its own special magic: longer nights meant a higher chance of spotting an owl and cooler temperatures meant snow-lined trails that looked like magic carpets sparkling in the slanted afternoon sun. 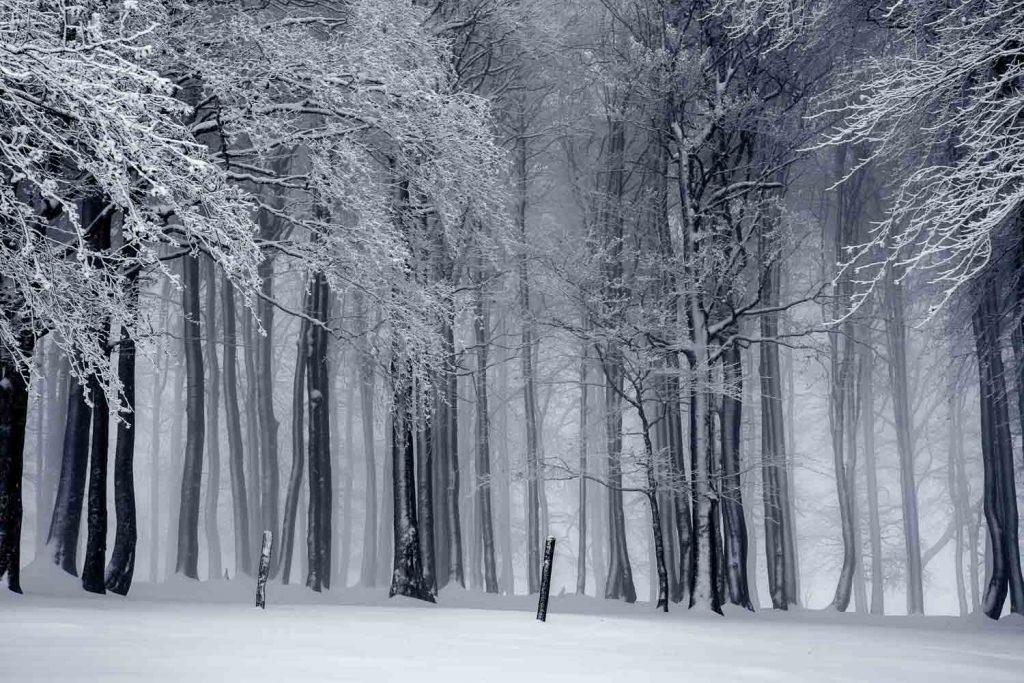 Katie and I ultimately separated on the last loop when a lingering cold reared its onerous head and I found myself struggling for breath on the last long climb. By the time I could see the finish, where Nick and my dad waited, I was wheezing and gasping and thankful that the race was done. I had finished Orcas Island 100 as third-female and seventh-overall in just over 24 hours, 45 minutes. I hugged my Dad and Nick who were understandably just as exhausted; Nick had finished several hours before to win the race and my dad had stayed awake for longer than he ever has to ensure that I was well-fed and appropriately clothed on every loop.

Both Nick and I were tired, but our hunger was more pressing so we thanked James and the fantastic volunteers on course and hurried into town. It would be our first real meal in over a day and we were eager to experience the local Orcas cuisine.

We made a quick stop at our room to shower and change, and then headed to New Leaf Cafe, a French-inspired cafe that overlooks Eastsound’s quaint bay, eager for sustenance.

I barely made it through my meal before my eyes started to close on me, so the rest of the day was spent catching up on missed sleep then taking a dip at the Rosario’s salt-water swimming pool. My legs felt like lead as I kicked them in the water and I realized what a stunning contrast this warm water was to the frigid air atop Constitution less than 12 hours earlier.

Our farewell to Orcas came faster than expected. On Monday morning, we took a quick driving tour of the island, part of the San Juan Islands Scenic Byway, with time enough to jot down a few activities we wanted to do on a return trip: rent bikes through Wildlife Cycles for a pedal-powered tour of the island, adventure by sea kayak, and stop by the acclaimed Brown Bear Baking for a well-deserved island berry galette or rich chocolate muffin, regardless of whether we’ve just run 100 miles or not.

“Next time we’re just coming for the food,” Nick said as our ferry departed Deer Harbor and headed back to Anacortes.

I agreed, my legs creaky and stiff. Next time, Orcas Island was reason enough. 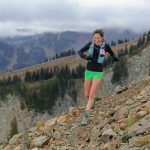 Jade de la Rosa is a freelance writer and trail runner based in Bellingham, WA. She holds an MFA in Writing and is at work on her first historical fiction novel. Follow her adventures running, racing, and exploring the Pacific Northwest at www.jadedelarosa.com