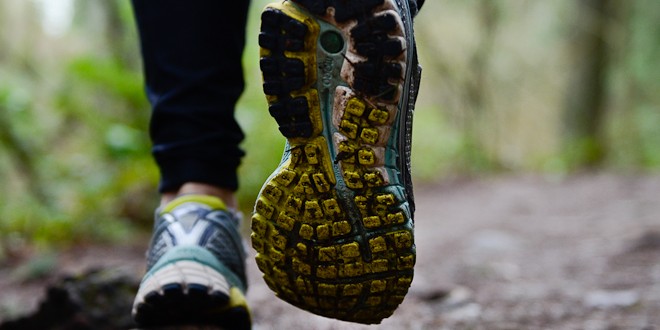 The Art of Falling

Adventure is a risk. Take the adventure of running. We won’t risk falling if we don’t run (or hike or bike or ski, for that matter), but we won’t run if we don’t risk falling, will we? It’s a natural tendency to be careful and safe, but so many of us are drawn to adventure and risk for a reason: The alternative is too small for us. Living a cautious life may keep us out of harm’s way, but it also keeps us out of the elements, out of the mountains, off the trails and sidewalks, and removed from the lessons that running and falling have to offer us. Running  teaches us to breathe deeply, to push ourselves, to explore the outer reaches of our endurance and pain thresholds. Falling teaches us to be pliable and resilient, to know we are stronger than we thought we were.

Have you ever taken a fall while you were out on a run? Where was it? Was it in the mountains? On the track? The sidewalk on the street by your house? No one wants to take a tumble, but every runner falls at some point. I’ll never forget my first time.

“It’ll be an easy 10 miles,” my husband, Bill, said to me one summer morning several years ago as I pulled on my running shoes. We were early enough in our marriage at that point that I still believed him when he promised such things. Fairly new to running in general, I was definitely an inexperienced trail runner. But I had historically been a careful person – someone who tiptoed through life without taking big chances. I wasn’t keen on Bill’s plan to go running in the mountains for the day, but I was also in a phase of learning to stretch myself and to try new things. 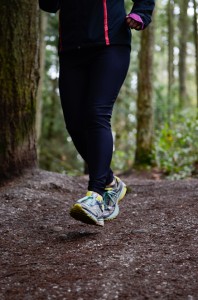 An hour later we were at the Artist Point parking lot to do an out-and-back on the Ptarmigan Ridge Trail, and then we were climbing a gradual but very steady incline toward Camp Kiser at the foot of Mt. Baker. I didn’t  find it easy, as Bill had said I would. In fact, because this was my first trail run in the mountains, I was laboring to learn the cadence required for hopping over rocks and around switchbacks. Focusing my eyes only a short distance in front of my feet, I concentrated and worked hard to keep up with my husband, not even noticing the mountain views or the flourishing mid-July greenery.

Before we reached our turn-around point, I took a break to sit on a boulder, take in my surroundings, and eat a granola bar while Bill carried on for another half mile. He stopped to pick me up on his way back, and I reveled in the feeling of floating down  the hill. Sweet gravity and a cool breeze sweeping up from the valley below gave me a feeling of weightlessness – of soaring strength.

Just past Coleman Pinnacle, I shouted to Bill, who was behind me now, “It’s more fun going down than coming up!”

Turning my head, I prepared to repeat myself when… Thump! Down I fell onto the rocky trail not a few feet from a steep cliff that, had I been just a tad farther down the hill, I would have tumbled over.

“Oh geez, are you okay?” Bill called out. He reached me quickly and looked me over to assess for injury.

I was fine – a little scratched up. Nothing serious. But since this was my first fall as a runner, I sat still for several minutes to collect myself, stunned at how stupid I’d been. What was I thinking when I took my eyes off the trail? When the shame finally faded and I’d caught my breath, I got up, brushed myself off, and continued running. That’s all there is to do – in running and in life – after all. Get up. Move on. A little worse for wear. 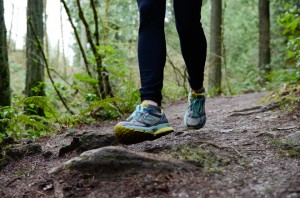 Many years later now, as a seasoned runner, I’ve fallen countless times. And I’ve been with others when they’ve taken tumbles, too. Bill has fallen and twisted his ankle at least three times on a rock that protrudes ever-so-slightly out of the ground on the trail right near our house. He keeps running that trail because it leads him to his favorite running route – one he travels a few times every week through Whatcom Falls Park.

If I have to fall, my favorite place – because it’s so beautiful – is the trail alongside Baker Lake, where I’ve taken two significant tumbles on separate runs along the soft brush-laden, fifteen-mile trail. Both times I was grateful for the give in the earth and that I didn’t hit any rocks on the way down.  The first time I took my eyes off the trail to look at the sun shining on the lake. The second fall at Baker Lake happened in October of 2011 during the Baker Lake 50 K (of which I only finished half) when I tried to let another runner pass me. Learning to gracefully share a single-track trail is a skill (not to mention a good metaphor for relationship) that all trail runners need to master. That last fall at Baker Lake made me frustrated with myself. Discouraged and aware of being acutely uncoordinated, I complained to Bill as he drove me home, “What’s wrong with me? I can’t even stay on my feet.”

“Could be worse,” he said. “It could have been cement.”

We drove on in silence. He was right. While I was almost guaranteed to fall if I did a trail run of any distance, at least I wasn’t prone to falling on the street. I couldn’t say the same for my friend and running partner, Julie, who had fallen several times over the years while we were training out on the roads. Once she’d stumbled over a crack in a sidewalk in Pasadena right before a half marathon at Disneyland and hit her cheek on the concrete. But she jumped right up and kept jogging along beside me. I was horrified by her emerging bruise and threatened to stop running with her if she didn’t try to be more careful, but her “risk nothing, gain nothing” attitude was infectious. She wouldn’t hear of being “more careful.”

Careful just isn’t any fun. And it doesn’t teach us anything about ourselves.

As I said, no one wants to fall, but since it’s inevitable, I highly recommend the Ptarmigan Ridge and Baker Lake trails. And the sidewalk just outside of Disneyland in Pasadena. Or better yet, the trail just beyond your front door that leads to your favorite running route.

And since falling is a given in this life, why not just roll with it? Next time it happens (whether literally out on the trail or figuratively in some other endeavor in life), sit for awhile and let the shame fade, assess for injury, and if you’re still intact, brush off and keep moving.

It’s really the only choice. 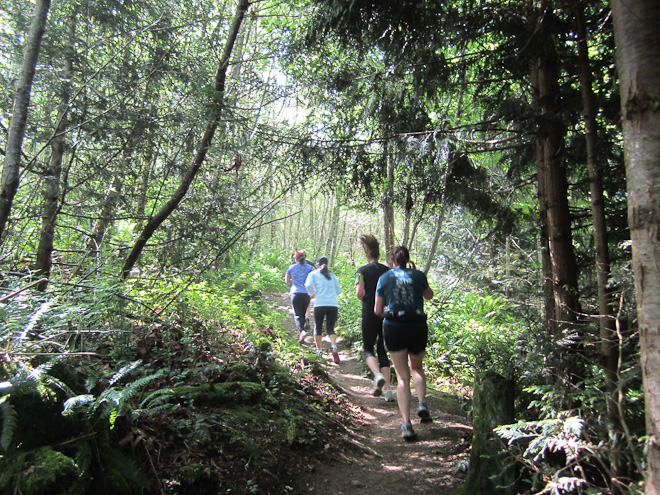 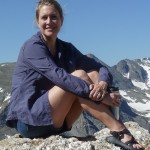 Cami Ostman is the author of Second Wind: One Woman’s Midlife Quest to Run Seven Marathons on Seven Continents (Seal Press) and is a longstanding member of the Greater Bellingham Running Club. She is a writing coach, family therapist, and the co-director of the Wind Horse Half Marathon. She lives in Bellingham, Washington.