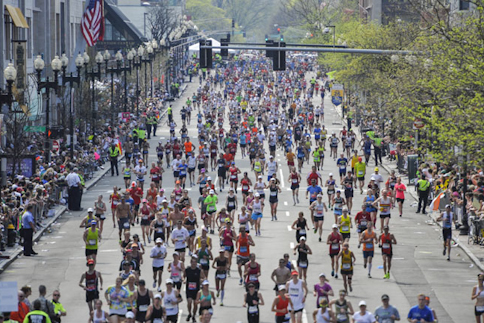 The Boston Marathon: Reflections and Resolutions

I dropped my husband Bill off at eight o’clock so he could catch the bus to the starting line and made my way to the Riverside T Station to park the car. I’d be meeting David, our friend Lindsay’s father, at 9:30 so we could spend the day together watching the race. This was my third time cheering Bill on in the Boston Marathon so I knew exactly where we should stand to get a good view of the runners between miles 16 and 17. 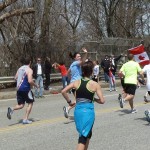 The weather was perfect for everyone: not too cold if you were standing around all day as a fan and not too hot if you were running. David and I stationed ourselves pressed up against a metal barrier erected to keep spectators off the route, dug out our cameras, and settled in for several hours of shouting accolades. 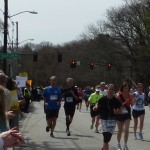 There’s absolutely nothing like the Boston Marathon with its thousands of runners and hundreds of thousands of fans lining the roads the whole way! I’ve run 25 marathons myself, but since I tend to slog along at the back of the pack, I’ve never hoped to qualify for Boston. My husband, however, has qualified repeatedly, and this was to be his fourth time running the esteemed and celebratory event. I have to admit to a little jealousy as I’ve stood on the sidelines watching the faces of the Boston runners—from the elites to the charity racers—smiling with pride and accomplishment when they pass me. But mostly I’m content to be a fan and feel excitement on their behalf—happy to be one little soul among the throng.

Monday was no exception. I signed up to receive text messages to track five different friends, including Bill and Lindsay, as they passed the 10K, half marathon, 30K and finish points. This meant we could stand by watching for them with a decent estimate of when they would be coming through. 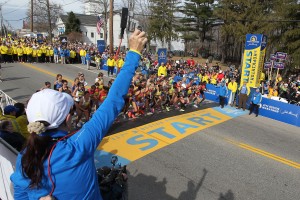 For a couple of hours we enjoyed cheering for those who came through early—the wheelchair racers and the elite women and men. Around 1pm, right on target, Lindsay passed us. David and I caught her attention and got a satisfied wave from her. Then came Bill a few minutes behind Lindsay. He knew where I would be standing, so he stayed to the right on the route where he could pause and kiss me as he passed. It was all happening as we’d planned, on schedule and without a glitch.

Shortly after they’d gone by, David and I hopped on the train to make our way to the finish. From experience, I knew we wouldn’t be able to get close enough to watch our runners cross the line, so when we got to Copley Square, I suggested we go find a cup of coffee a few blocks away and let Lindsay and Bill finish and make their way through the recovery zone before we went to meet them. Once I got the texts telling us they’d both crossed the line, we started back toward the family meeting area.

Twenty minutes later, coffee in hand, near where we’d all agreed to meet, we heard a loud BOOM. David commented that someone important must have just finished the race to warrant such a greeting. Wonder who it was? Then there was another BOOM. Briefly it crossed my mind to think, “Could it be a bomb?” but I dismissed the thought resolutely. There could be no reason to bomb a marathon. The blasts must be some sort of planned fireworks or maybe a transformer blew out its power source.

In my pocket, my phone buzzed. My friend Brandon tweeted from back home in Washington State, “Are you ok? What’s going on there?” Then I saw that I’d missed a call from Lindsay. When I dialed her back she was frantic to know where we were. 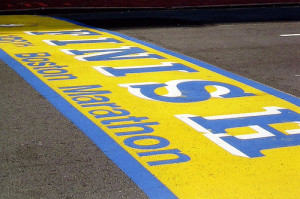 I left David waiting for Lindsay and went down the road to look for Bill by myself. People were crying in the family area, but I still didn’t know what was happening. Runners often cry after a marathon. It’s a tough haul running 26.2 miles, certainly cry-worthy!

I tweeted Brandon back and asked him what he’d heard.

My phone buzzed again to notify me of another friend’s pace, but it indicated her time as of “40K” only, and I knew they must have stopped the race for some reason—my friend would never quit a marathon before the finish line. A marathon is 42 Kilometers. They weren’t letting runners finish. I tried not to listen when I heard passersby say words like “blood” and “bomb.”

My heart was pounding as I searched the crowd for Bill’s face. A mother passed by me, comforting her crying child. Then another family passed, tears streaking down their faces. Why were the children crying?

I tried to breathe, the way I do near the end of a race when, tired and ready to be done, I have to rally my resolve to keep going. I had to focus on my belly rising and falling not to give in to my rising alarm that Bill wasn’t yet at our designated meeting area. I reminded myself that he was typically slow in recovering, that he liked to linger over the food, that he needed to get his drop bag, and that he might decide to change his clothes before coming to the family area. 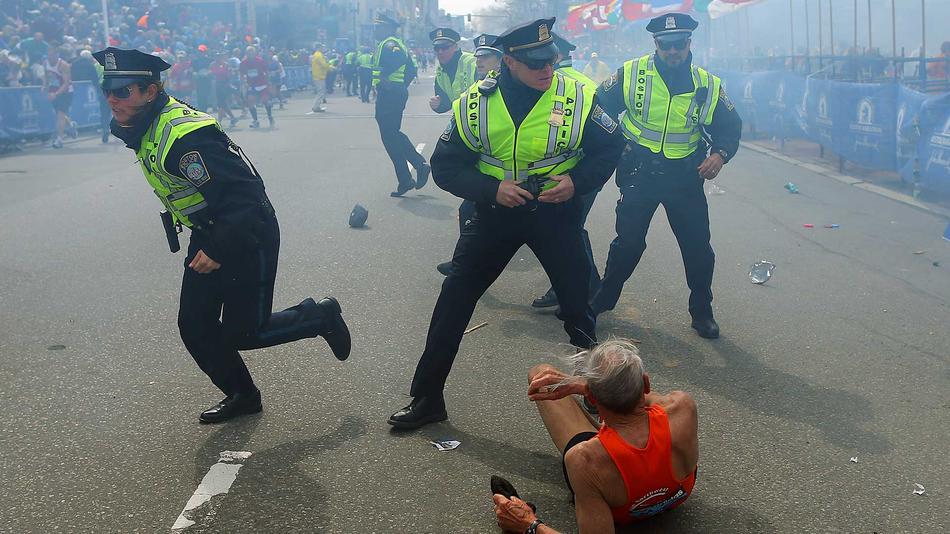 I called David and Lindsay and asked them to come to where I was standing so we could all be together. And then I called Bill’s phone. No answer, but that wasn’t unusual either. Much to my ongoing frustration, Bill rarely remembers to check his phone.

Suddenly, my phone was buzzing incessantly with text messages. Are you ok? What’s happening? Are you near the explosion? I couldn’t answer yet—not until we found Bill.

And then there he was, walking stiffly toward us—obviously confused by the growing chaos. Still, he was just a tired marathoner happy to see his number one fan, and I was relieved to find him.

There was no announcement to evacuate the area; we (and by “we” I mean the four of us, but also everyone else) just knew we should get away from Copley Square. We heard the first siren and knew for sure that someone must be hurt. But soon dozens of emergency vehicles rushed in from every direction; the sound was deafening. Still, the only information we had was coming from family and friends checking on us—incomplete at best—but we knew from the sheer number of emergency vehicles that something big must have happened, something more than an accident or a prank gone bad.

People, most unfamiliar with the city, were moving with a growing sense of crisis, disoriented on the street as they tried to get out of the square. Without the full story, no one knew how much to panic or what the continuing threat might be, but everyone seemed to comply with the unspoken understanding that we should get the hell out of the general area. Down in the subway where we learned that the line we needed was closed down, people seemed eerily disconnected from what was happening above the ground. Ignorance is bliss, they say.

We ended up in a bar in the Italian part of town—the only place we could easily get to on the subway—and waited out the chaos. It was only then, with access to a television that we learned what had happened: The Boston Marathon had, indeed, been bombed. Bill and Lindsay had been no more than 300 yards from where more than a hundred spectators were injured and three people were killed. 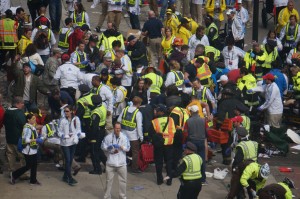 Normally,  I’m fond of extrapolating life lessons out of race experiences, but there isn’t anything I want to learn from this terrible tragedy which almost (but didn’t) change my life. I don’t want to learn to be a more vigilant runner or to stay away from big sporting events. I don’t want to decide the world is more dangerous than I thought it was on Sunday or even that I should hold those dear to me closer. I want to go about my business as usual, trusting the odds are on my side that I’ll be safe in this world, running happily in big races, and getting irritated with Bill when he doesn’t answer his cell phone. I don’t know if I can pull it off, but I don’t want a senseless act of violence to change my worldview—one I’ve crafted intentionally and thoughtfully over the years.

There is one thing that has changed for me, though: Next time I won’t be content on the sidelines. I want to go back to the Boston Marathon as a runner and show solidarity and support to a city that hosts one of the most extraordinary events in the world. Thank you Boston. Our thoughts and prayers are with you.

Cami Ostman is a regular contributor to Adventures NW and the author of Second Wind: Seven Marathons on Seven Continents (Seal Press). Her latest book, 26.2 Life Lessons: Helping You Keep Pace with the Marathon of Life (written with Carol Frazey) is available at http://www.7marathons7continents.com