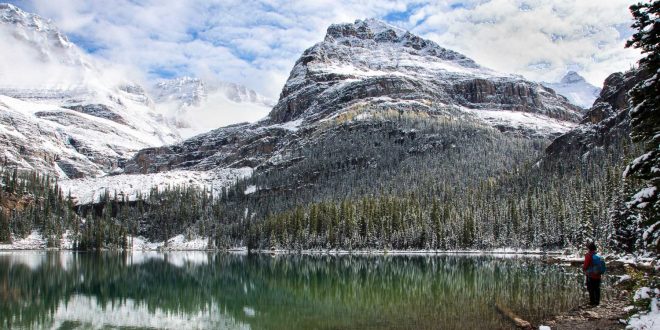 This is what even a short stay in BC can do for you, Destination British Columbia is telling a growing audience of wellness-minded potential tourists. Quoting scientific studies, a recent promotional short video of theirs informs us that immersion in nature improves short-term memory by 20%, boosts creative problem-solving by 50% and decreases cortisol level by 12%. This holds true for all seasons, even now in the deep of winter. Freezing temperatures could tempt you to stay indoors and comfortably watch football on TV, even try some football-betting.pro  But in BC they have a different idea: “You belong in the wild. You belong in British Columbia”.

The 2019-2020 campaign is the brainchild of Destination British Columbia (Destination BC), a provincially funded, industry-led Crown corporation. What they define as a “winning aspiration” of their operations is to “share the transformative power of BC experiences with the world…and
grow sustainable social, cultural, environmental and economic benefits for all British Columbians.” How do they plan to do that? Through a combination of global marketing, destination development, industry learning, cooperative community-based programs, and visitor servicing. They receive yearly support in the range of $52 million, out of a Provincial investment of about $140 million in BC’s tourism ecosystem as a whole.

One well-known testimonial of the many-fold benefits of spending time in nature comes from Florence Williams, author of The Nature Fix. On her personal website, Williams claims that even five minutes in a forest are enough the feel the effects. She explains: “Your heart rate slows. Your facial muscles start to relax. Your hard working frontal lobe begins to quiet down.” Among the things she lists as lessons learned from more than two years of research are that smelling pine trees boosts the immune system, listening to birds singing or observing fractal patterns in nature induces the brain to put out more Alpha waves and creates a sense of well being, making a human being become calm and alert. An hour and a half spent walking by living plants and animals reduces self-centered preoccupations and enhances connection to other people and the world around. As little as five hours a month in nature can make you happier overall.

These are interesting little factoids, but three day are a recommended minimum stay in natural surroundings, if you want to start reaping some serious benefits. That means a long weekend. A week or longer is obviously even better. In Japan spending time in the woods is recognized as medical therapy and called shinrin-yoku, or forest bathing, a term coined by the government in 1982 but inspired by ancient Shinto and Buddhist practices. British Columbia has learned the lesson and realized the enormous potential of its exceptional bounty of natural heritage. Something much larger and powerful than simply “outdoors”.
The British Columbia Effect campaign kicked off in January 2019 but is going to last all through 2020. “Tourism in BC has continued on its upward trajectory, with increasing revenues, employment, wages, and visitors”, stated Marsha Walden, CEO and president at Destination British Columbia in her year-in-review message last December. The five million uses of #exploreBC on Instagram, the first destination in Canada to reach this milestone, are a sign that the Province has chosen a winning strategy.