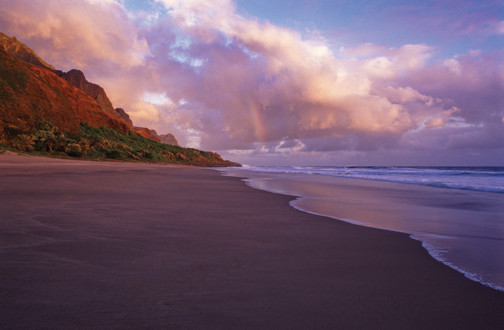 The Edge of Paradise: A Walk on the Na Pali Coast

Story and photos by John D’Onofrio

I’ve been thinking about the 22-mile Kalalua trail for many, many moons. The trek is a world classic; winding along the breathtakingly beautiful Na Pali coast of Kuai’i on an ancient route that skirts heart-pounding cliffs and dives into primordial jungle. Na Pali is aptly named. It means, literally, the cliffs. Direct and to the point.

And at the end of the line is picture-perfect Kalalau beach; the very embodiment of tropical paradise. A place, it is said, where dreams come true.

The trip has been nearly a year in the planning. I’m accompanied by my two sons, Ethan and Christopher. It’s a chance for us to spend some quality time together in one of the most beautiful places in the world. The hike has a reputation for being intense; rough travel, exposed cliffs, impenetrable jungle – epic in every sense of the word.

A Kuai’i-based friend has driven us from Hanalei to the trailhead with a promise to pick us up again in six days. His rusted-out Buick Estate Wagon pulls into the parking lot in a cloud of red dust and we unload our backpacks among swarms of tourists taking pictures of each other. The trailhead shares a parking lot with Ke’e beach, a gorgeous (and extremely popular) north shore destination and today it’s crowded with blissed-out tourists.

We hoist our packs and start up the rocky trail, climbing ancient stones placed there by the long-gone Hawaiians who once lived in great numbers on the Na Pali coast. It is estimated that at one point 5,000 people lived along this now empty stretch of coastline. Today, the permanent population is limited to the scattered feral hippies that have staked claims deep in the jungles of the Kalalau valley, escapees from civilization, left more or less alone by The State. Sanctuary: Elusive in this regulation-obsessed age.

We climb over the stones and remarkable gnarled roots into the jungle amongst throngs of camera-clutching day hikers, eagerly seeking a glimpse of Na Pali. The smell of sunscreen is thick in the air. Saying ‘Hello’ so often is exhausting. I look forward to the solitude of the trail ahead. 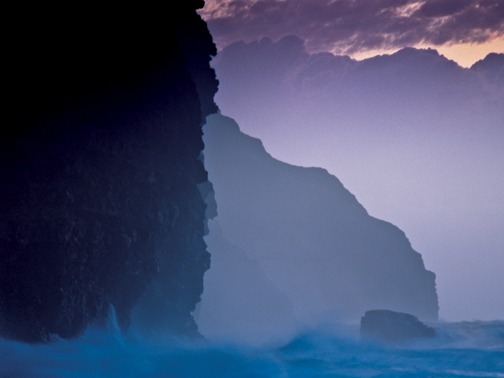 From a promontory the cliffs are revealed, receding into the distance like a Chinese brush painting, mist and dazzling ocean combining to delight the eye in ever-changing proportions. The path descends to Hanakapi’ai beach, two miles in and the end of the line for the day hikers. We cross Hanakapi’ai stream on boulders – we won’t be at sea level again until the trail ends at Kalalua Beach.

From the beach, the trail climbs 800 feet in a hurry to the highest point of the trip where a giant boulder dubbed Space Rock marks the top. As expected, the tourists are all gone and we make our way quietly through the vibrant green jungle from one high point to another. Whales play far below in the sparkling sea and the air is filled with the music of unknown birds, the wind in the trees, and the distant crashing surf. We plunge into Hoolulu valley. After crossing the valley there is another climb. And another valley. And so on.

After several hours of this continuous up-and-down, we descend into the Hanakoa Valley, our destination for the night. We cross Hanakoa stream and make camp beneath wild coffee trees on a long-abandoned taro terrace in the bird-noisy jungle.

The next morning, a cool breeze blows through the canopy as we break camp and climb out of the jungle and onto exposed cliffs. We surprise a family of goats milling about the trail and they respond with irritated goat noises, unhappy with the intrusion. Far below, we can see dolphins jumping out of the water, their sleek forms appearing and disappearing against the sparkling surface of the ocean, an image of freedom and exuberance.

As we leave Hanakoa behind, the landscape changes rather abruptly – we are moving onto the dry side of the island and the dense tree cover now occupies only the gully bottoms. The cliffs rise even more sharply, covered only with a green patina of low vegetation and scattered swatches of exposed red dirt. Giant Sisal plants begin to crowd the trail, their bizarre forms like something imagined by Dr. Seuss. 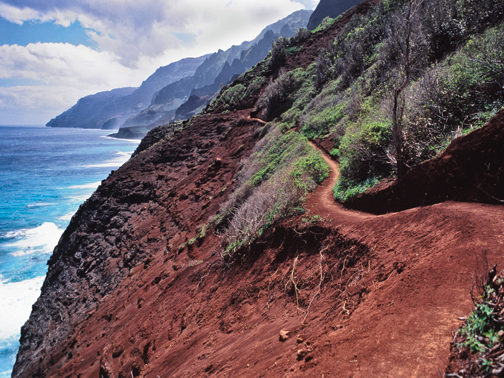 The route now takes us along soaring cliffs with wide air a foot away. Because of the exposed nature of the trail, this area is called Death Valley – not a place for acrophobic-types.

The cliff-hanger section of the trail gives way to another grunt up through thick vegetation on the northern side of Pu’ukulua. We cross a tumbling stream and dunk our sweaty heads in the cool water. From the top of Pu’ukulua we get our first glimpse of Kalalau beach, a vision in the distance. A final descent down a loose red volcanic slope (Pu’ukulua is also known as Red Hill) brings us down, at last, to sea level again.

And there’s the beach.

The pristine strip of white sand is bordered by precipitous black cliffs on each end and backed by the fluted green spires of Na Pali. Waves crash in stupendous explosions of spray. A two-tiered waterfall drops from the heights to the beach, completing the vision of tropical nirvana.

We step onto the soft sand and drop our packs. Taking the boots off and feeling the sand between my toes is indescribably delightful. Within a few moments we’re tumbling in the waves of the blue-green sea, all the sweat and dust of the trail gone in a splash. From out in the water the long coastline is fully revealed – miles of soaring sea cliffs in both directions.
The color scheme is stunning – the cliffs alternate between emerald green and the magenta of exposed volcanic soil, giving the scene the feel of a Maxfield Parrish painting. All that’s missing is a toga-clad Greek maiden holding an urn.

We climb up to the travel-poster waterfall and rinse off the salt and sand by leaning back in the cascade, against the smooth time-grooved stone at its base. Yips are emitted. 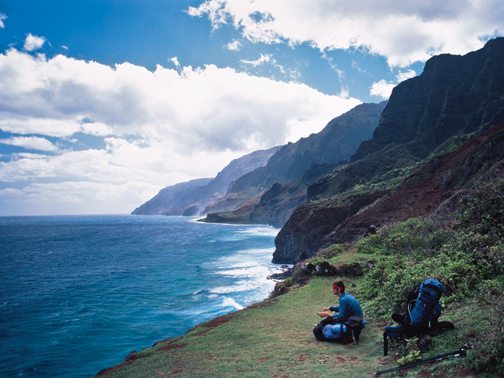 The little bluff above the beach where we pitch our tent offers a million dollar view of both the ocean and the waterfall. Firewood is gathered from the base of the cliffs amongst the litter of boulders kicked down by goats. The impact zone.

As evening encroaches we watch the towering waves pound the cliffs, their foaming curls backlit spectacularly by the low angle sun. Mist rises from the green spires above camp. The sun drops into a complicated bank of clouds, illuminating them with expressionist strokes of light. The wet sand at the water’s edge gleams with an iridescent luster in the golden sunset.

The following days are filled with a hundred variations on a theme of tropical reverie. Basking on the beach, splashing in the shore break, exploring the magnificent and mysterious jungle.

In the mornings, the cliffs above camp are crowded with goats, moving like tango dancers across the sheer faces. Birdsong surrounds us and the immense waves crash like tympani on the empty beach. We’ve got this tropical Shangri-La to ourselves.

In the evenings the colors intensify and the coast is bathed in rich, golden light. When the sun sinks towards the radiant Pacific, the spires are painted in orange, purple and red. Each night a crescent moon rises and the moonlight shimmers in the foam of the waves. Our rhythms slow down and we find ourselves speaking in quiet voices.

On the second morning on the beach we load our day packs for an exploration of Kalalau Valley and head up the trail above the beach. Rounding a bend we encounter a somewhat wild-eyed and sun-darkened man walking our way, the first human that we’ve seen since the first day on the trail. He introduces himself as Duke and tells us that he’s been here for four months, living in the jungle. He’s got a kayak stashed in the bush that he uses to paddle to Hanalei for resupply. He bids us a good day and we continue on our way, up into the dense jungle.

The path meanders through the remains of old abandoned Hawaiian villages, passing over numerous overgrown taro terraces. Walking through the ancient colonnades of stone feels like walking with ghosts. One can only imagine this coast full of villages and people farming, fishing and eating fruit from the trees. The garden of Eden.

I climb a crumbling red rib to a vantage point high above the tree cover and survey the valley spread below me. The green pillars rise in a great amphitheatre against the blue sky. To the west I can see the beach, its strip of white sand merging with the green sea. An ancient stone wall at the edge of the jungle bears the complicated patina of the passage of untold time; long years facing the open Pacific. A rainbow appears, unutterably beautiful, and the cresting waves flash in the last light of day.

Our last morning on the beach. A gentle breeze softly fingers the twisted trees above our camp – the sky is overcast, a good thing as our hike today will be exposed to the tropical sun.

As we load our backpacks, Duke reappears from out of the jungle. A small old-fashioned rucksack is slung over his shoulder, a bamboo flute protruding. He greets us warmly and wishes us a good hike. Christopher asks him how long he plans to stay at Kalalau. He thinks for a long moment and then says, “As long as it takes.”

We hit the trail, ascend Red Hill, and start across the plunging cliffs, among the ubiquitous bands of goats. A Hawaiian man passes us, going in. He’s barefoot.

The miles pass in a series of zen-happy moments, the trail undulating along the spectacular cliffs, plunging into bird-filled jungle and then emerging on the green, wind-swept edge again. Once again we camp in Hanakoa Valley among the taro terraces.

We rise early and hike through the jungle on the indistinct path to Honakoa Falls, at 1,400 feet, one of Kuai’i’s tallest. We’re alone in the upper valley with the birds and take advantage of the fine morning sun to submerge ourselves in the pool at the base of the bridal veil falls. Wet and refreshed, we linger in the lush green valley, reluctant to return to camp. Finally we retrace our steps, strap on our packs and head for home.

All too soon, I find myself back at Hanakapi’ai stream and begin the final climb up the ancient paving stones over the last saddle above Ke’e beach and down to the trailhead. I walk down the beach, incongruous with my massive backpack and filthy clothes among the sun-bathing crowds on the sand. I drop my pack, don my swim suit and float in a state of exhausted bliss in the calm reef-protected water. Looking down the coast from the lagoon, the cliffs recede in the distance like a dream.

For us it’s a dream that has come true. 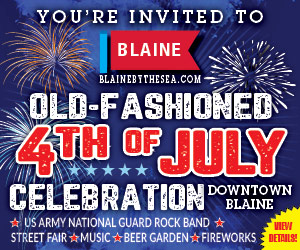