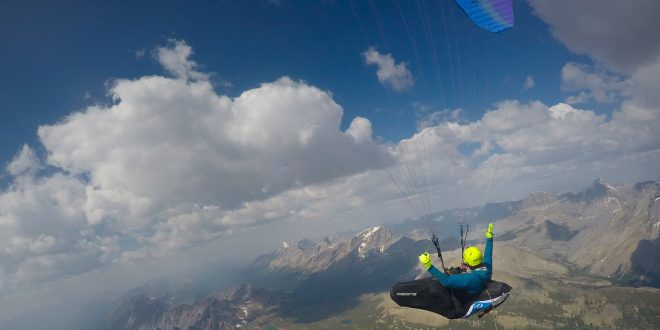 There it was: The Endless Chain. Tall, long and slender. Like a rocky red carpet laid out before me, I approached the soaring ridge with confidence, containing my excitement, knowing that this would be the first time a paraglider would ever fly along that perfect spine. But as I neared the sheer face, I found myself pummeled by gust after gust of alarming, turbulent wind, causing my wing to deflate and enter a series of violent collapses. I had come so far to be here, yet now, just 500 meters from my goal, I realized that I had also come too close.

When I first learned that humans could travel great distances by paraglider, I imagined myself becoming the first person to float down the entire length of Canada’s pristine Rocky Mountains. Ironically, the more I learned about the sport, the more distant that dream became. Everything about them was daunting: Their remoteness, unpredictable weather systems, and sheer monumental size. I spent the first decade of my piloting career running from them, flying as far as I could from my country’s iconic back yard.

Two summers ago, all of that changed when I mustered up the courage to fly, vol-bivouac (fly-camp), from Vancouver, BC to Calgary, Alberta. This 39-day, 1000-kilometer trip, crossed the entire span of Canada’s southwestern mountain ranges, ultimately leading to the final hurdle, the Rocky Mountains and my first-ever crossing of the Continental Divide.

That fateful west-to-east flight across the Rocky Mountains caused a sort of stimulus overload. Feelings of terror, amazement, and pride all flooded my senses, leaving me begging for more. Those mountains were so majestic, so visually stunning, so perfect for the kind of flight I’d long dreamed about! The Rockies had me hooked.

Two years later I found myself crossing from Montana to British Columbia on foot, hell-bent on accomplishing my ultimate dream, the first south-to-north paraglider journey along the entire length of Canada’s Rocky Mountains. The epic journey would include the first-ever crossing of Jasper National Park and the first flight along her famous Endless Chain ridge, a 25-kilometer long series of unbroken peaks, towering 1000 meters over the Icefields Parkway below.

I took off from a logged-over slope, two kilometers north of the U.S. border. From there, I spiraled up into the clouds riding thermals, rising air created by the heat of the sun. I flew north for over four hours, from thermal to thermal, until I’d covered 90 kilometers and found a place to land on a summit directly east of Cranbrook, BC. I set up my tent, melted some snow and enjoyed the evening, filled with anticipation for the adventure just begun. In the morning, I was aloft again, soaring northward among the peaks.

The first few flights were a dream come true, as the scale of the undertaking settled over me, my mouth permanently agape as a result of the incredible views along the southern end of the Canadian Rockies. Sometimes, either due to poor weather or because I had run out of food, I would land in a valley, hike to a grocery store or gas station and replenish my peanut butter supply before hiking back up the next mountain. I averaged about 80 kilometers each flight and, though I would sometimes wait up to seven days for poor weather to pass between flights, I kept sane by exploring the vast alpine, learning to speak marmot and rocking out on my ukulele.

But it was north of Golden, 250 kilometers in, that the reality of this expedition really started to sink in. That’s where the comfort of vast farmlands gave way to 60-plus kilometer stretches of Rocky Mountain wilderness, where, under no circumstances could a pilot land without becoming seriously injured. The fear of becoming grizzly bait was palpable and I did everything I could to muster the courage. It never came.

The wind was blowing from the west, but felt too strong, meaning that if things didn’t feel right after flying even just one-quarter of the line, I’d have no guarantee of making my way back against it to the safe landing options in the Columbia Valley. I had a one-way ticket over the divide and the voices inside my head were screaming “This isn’t your day.” Choosing not to make this move was possibly the most difficult moment I’d ever had as a pilot. I had to step out of my body, look deep within and come to grips with my limitations.

Flying back to the top of Mt. Seven, I spent the three following days hunkered down, pinned by strong winds and passing storms. My mind played games on me, shifting between being angry with myself for giving into fear and resisting that condescending voice I knew all too well. It became increasingly clear that the headwinds or tailwinds, strong as they might be, were nothing compared to the greatest challenge that I would face on this journey: the struggle to overcome the voices in my head.

As the days passed, I was a mess—just lying in my tent as storm after storm passed, depressed and feeling disconnected from my life’s purpose, I realized that I loved paragliding because of how it encouraged me to push my limits. At the same time, I realized that this time, I may have found my limit.

The following day, the weather finally cleared but it was too late to fly. I had just one day of peanut butter left and made up my mind to fly down to Golden and to end my expedition there.

Once airborne, I found a thermal and climbed as high as I could to take one last look at the Great Divide. It was the most beautiful thing I’d ever seen. And it was in that moment that a pair of bald eagles soared past me. They headed straight for the Divide and I felt a flickering light inside that I hadn’t felt in over a week. Instinctively, I turned around and flew full speed to catch up. They showed me where the lift was and we climbed in unison. I did everything I could to keep up with the pair but, after about 30 kilometers they were long gone. I was alone in the sky, hypnotized by glaciated summits, raging rivers, and nameless valleys as far as the eye could see.
Circling over the Divide, I flew back and forth between BC and Alberta considering my next move. Landing in Banff was illegal but the stubborn west wind precluded flying back to the safety of the Columbia Valley. I had one option: Fly like a bird. “Look where you’re going”, I told myself, “not where you’ve been.”

From summit to summit, I flew on with a confidence I’d never known, straight up the Columbia Icefields until I’d reached Jasper National Park and the subject of most every dream that I’d had over the past two years; the famous Endless Chain Ridge. Though no one had ever flown its length, I was convinced that the long, sheer southwest face would be the most relaxed ridge-soaring session of my life. What the hell was I thinking!? These were the Rockies and the turbulent north wind roaring over the summits turned my dream flight into what felt like a nightmare! Then suddenly the late evening thermals faded, and as I sank out of the sky, it seemed I would be grounded.

But just then, wham, like a stiff uppercut, a small but strong thermal core came ripping up and sent me rocketing up above the razor-sharp spine. The beauty of the moment took my breath away. Streaks of red and brown flowed into green meadows and emerald lakes. Suspended like a puppet from the clouds, I flew north, entering the turbulent wind-compression zone between The Endless Chain and Cleavis Peak, the mountain to the north. But there was no escape. I began getting flushed out into the valley almost instantly. I was losing about six metres per second and, now well below peak height, had no more than 30 seconds to make a choice: land on the Icefields Parkway and begin two days of walking to Jasper, or try to land on a narrow snow bank half way up the rocky face of Cleavis.

I imagined the pair of eagles flying alongside me and once again felt that same level of control and self-confidence that they had shown me that morning. Buoyed by the memory, I flew directly toward that snow bank, spiraled down and slowed the wing just above it, touching down like a feather in the breeze.

That evening I melted snow from that little patch, looked back upon the silhouetted profile and expressed my deep gratitude for the important lessons I had learned along the way: To the birds for showing me that I am one with nature, and to the Endless Chain for showing me my place in it.

After 52 days, Benjamin realized his incredible dream when he arrived in Prince George, BC. To view his film, photo-documentary and maps, visit benjaminjordan.com. 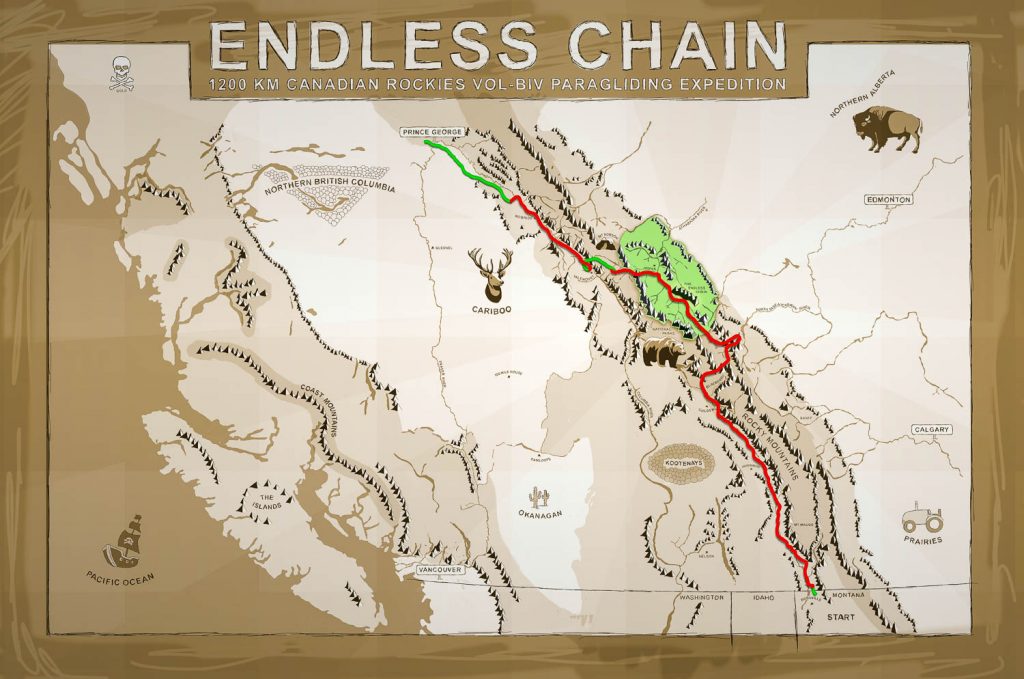 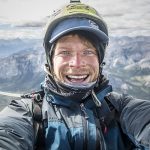 Once an established fashion and advertising photographer in Toronto, Benjamin Jordan fell deeply in love with paragliding and chose to combine his passions into a medium for positive change. When not off flying or filming in some remote corner of the earth, he calls Honey Bus, his 26-foot converted school bus, home. Together they weave through the Rocky Mountains in search of new places to live, shoot, edit, and fly.