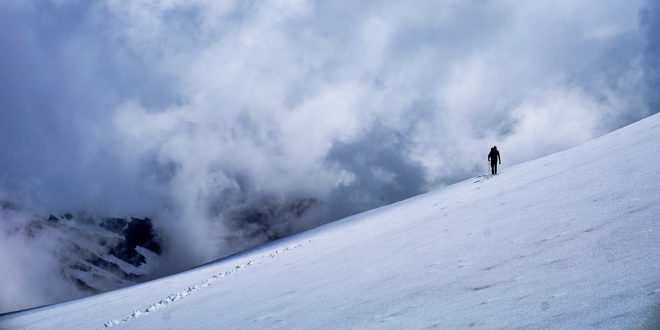 The Finest Kind of Madness

We all start somewhere. This is where the Madness begins, I suppose; In random passing, a glancing blow.

Driving the sinuous byway of Washington State’s North Cascades Highway, some three hours after turning east from the high-test thrum of the Interstate corridor and onto the only road to cleave the wilderness of the North Cascades National Park in two, a curious thing happens to me.

Here the roadway reaches that high 5,500 foot crescendo of Washington Pass, among the stunted and triumphant sub-alpine fir, where the pavement is kinked like a garden hose, turning a full 180 degrees to pitch off into a wide-bellied valley. Above the hairpin, however, is the real prize: the nakedly-rising granite of the Liberty Bell formation.

I crane and contort my neck in every conceivable position just to catch a glimpse of the soaring rock, that gold and black granite rising into the sky. I want to climb that. This is where the Madness begins.

Now I just had to figure out how to get up there.

On an early morning in mid-June, my world is split into two; rock and sky. A rope to tie it all together. Some 50 feet above me, guide Robert Fitzgerald is deftly using a rock horn as a terrain belay, feeding the line to bring me up. The granite of Washington Pass gleams beneath my hands. We are seven, tied into teams on three cords, ascending the South Arête of South Early Winters Spire. The toothy spines of the Cascades splinter and spin off in all directions, the jagged skyline at times interrupted here and there by colossal volcanic domes.

I’ve joined the ranks of the up there and hitched myself to Seattle-based mountaineering guide service and climbing school, Mountain Madness, somehow finagling my way into a spot on their 8-day Alpine Climbing Course and now, at this moment, find myself tied into the sharp end of the rope.

“Just focus on the friction of your feet,” suggests guide Arthur Herlitzka from below. “And be sure to take a peak over the edge.” We’ve come to a portion of the route near the summit known as the White Camel, a swale of smooth granite that forms a gable with heady exposure on either side. It’s the final test of our mettle en route to the top, and pulling past this balancing act, we move over easy ridgeline and onto the final balanced rock of the summit.

It’s a waking dream. A careful turn on my heels surveys the entirety of the North Cascades. It is at once everything and nothing of what I expected from my terrestrial vantage point far below. The feeling is indescribable, and I savor it just a little longer. Then, preparing to descend and looking over the opposite side of the summit, I swear I can see the hunched-over figures in their cars, eyes aimed right back up at us. Looking for that same feeling.

Arthur grins. “Welcome to the Madness.”

Mountain Madness has been in the business of making mountain climbers since 1984. Spearheaded by founder and climbing world superstar Scott Fischer, the Pacific Northwest guiding outfit would rise in recognition through the 90s, buoyed by both Fischer’s ascents of the world’s highest peaks without oxygen and a propensity to achieve epic summits in some of the world’s most remote places.

Much has changed since those days, but the core values of Mountain Madness remain resolute: a respect for—and celebration of—being among the mountains. The Alpine Climbing course I’ve found myself on is one of a deep catalogue that the company offers, spanning everything from local crevasse rescue courses to international trekking routes, to the ultimate precipices of the Seven Summits.

Our time together had begun three days previously, rendezvousing in Seattle before heading out to Leavenworth for two days of climbing skill instruction, and would end on the glacier-clad flanks of Mt. Shuksan, our final test of the skills we have gleaned.

On our hike in to Shuksan I remark at just how varied these mountains are, how much they demand and—ouch—how much you need to carry to climb them.

Our plan is this: pull into camp tonight, and then take advantage of the better weather promised for tomorrow to practice tying into a rope team, snow travel and building anchors to haul some unlucky soul from an icy maw, should that unpleasant need arise.

We arrive at basecamp in a total whiteout, but I know that Shuksan is out there. And in two days I get to climb it.

I am up before my 3 a.m. alarm. The wind has been howling all night, whipping our little fabric dome and contorting the nylon into a mildly claustrophobic death mask around my head with each full-throated gust. By now however it has slacked off, and our headlamps bob in the fading night.

We tie into the ropes using the skills we’ve been practicing for the last two days, pitching off onto the Sulphide Glacier, a broad white tongue of snow and ancient ice that lolls south from the summit. As the light comes up, it is apparent that today will be spent plodding around inside a ping pong ball, an all-white existence. Crevasses pull into and out of focus as we pass; the summit exists—in theory— in a void ahead.

Some hours later we’ve reached the bottom of the summit pyramid and taken shelter atop the first solid ground we’ve seen in some time. The wind has whipped into a frenzied icy blast, and our original plan to ascend the more exposed southeast ridge is abandoned in favor of going straight up the gut of the thing. It’s a snow-filled choke hemmed in by crampon-scarred rock, and its angle ramps quickly to a heady 45 degrees.

Our guides Arthur and Robert lead, steadying themselves with ice axes plunged to the hilt. We move in spurts and employ all manner of alpine climbing techniques to ascend, applying what we’ve learned in the past seven days. Finally, with a collective elation, we find ourselves on the summit, a black triangle among dense curtains of cloud.

This is where the Madness begins. 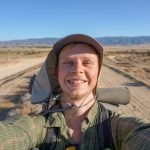 Nick Belcaster is a Bellingham-based writer with a particular penchant for exposed choss climbs, backcountry touring on Cascade concrete and taking long walks across the country. He contributes to local and national publications, focusing on the intersection of recreation, energy and the environment. 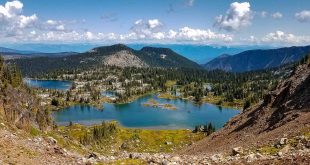