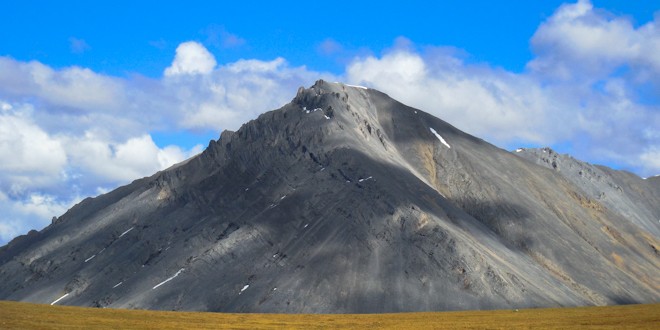 The Language of Humility: A Journey into the Brooks Range

From the moment I pull my pack from the truck, heft it onto my back and walk away from the road, I  am on my own. It is a relief for me to be dropped off at this lake, free of obligation, committed to nothing but finding my way through wide valleys, over a pass and down a river. I am familiar with the practice of solitude, comfortable with maps and compasses, accustomed to self-reliance. And yet, under this feeling of release is a quiet but steady pulse of apprehension.

The plan is to walk from Galbraith Lake, just off the Dalton Highway, up the Itkimalak River, and over a pass to the Itkillik River. Once at the Itkillik, I’ll inflate a borrowed packraft and float 20 miles before hiking the last five back to my current residence at Toolik Field Station. It’s mid-June: the mosquitos are about to hatch, the bears are foraging in earnest, and there might still be aufeis (sheets of lingering ice on arctic rivers that can trap boaters) to avoid. My headnet is close at hand, the bear spray is on my belt, food in a bear can. My trial run with the packraft – on a carpeted floor in the dorm – went exceedingly well. My strategy is to stay upright.

I know that this reticence, this impulse to turn around, will subside with each step forward. Moving beyond the immediate yearning for security is the only way to find genuine refuge. Now, in the ubiquitous arctic sunlight, I steer myself towards the headwaters of an unnamed creek, following the contours of the land, submitting to the rhythm of a truly wild country.

The peaks of the Brooks Range are elders among mountains, approximately 126 million years old, made up of highly deformed ancient seabed. All under ten thousand feet, these peaks might seem lenient compared to the Alaska Range, home of Denali, some 500 miles to the south. But not more than a mile into the trek, with my usual backpack load and the addition of the packraft, the word lenient has no context. When traveling in the arctic, distance and time are foreign languages. To say it plainly: it takes forever to get anywhere. In this country, where trees cannot take root, valleys are vivid tributes to the ice-age, and tussocks upend even the most sure-footed, five miles a day is a respectable goal. 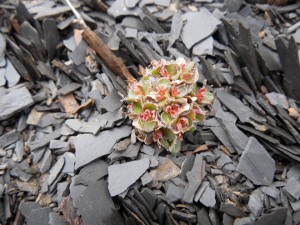 Further into the mountains my route alternates between braided river bed, muskeg, and mercifully solid tundra. I shift my backpack around, a futile response to the changing topography and the weight on my shoulders. Strapped to each side of my pack is a section of the kayak paddle, yellow blades hovering above my head. My bizarre silhouette moves alongside, a ludicrous attempt at a shadow puppet.

Every step reveals testimony of unrestrained lives: ground squirrel burrows on southern aspects, bear prints in damp river silt, polished caribou antlers, dropped year after year. This is the perspective I seek – to be one animal among many moving through the same landscape.

My passage is not unique – people have been walking this country for millennia. This kind of trek, without the intent to hunt or move to a seasonal home, is a modern development.  Like all indigenous people, the Nunamiut had to be keenly aware of the natural world – reading tracks, listening to other species, interpreting topographic features to make the Brooks Range home. Today, these skills are hard to come by, a language largely forgotten, supplanted by apps, personal locator beacons, and GPS. This is the dialect of the high arctic, a conversation about relationship, awareness, and modesty. I am here to expand my vocabulary. 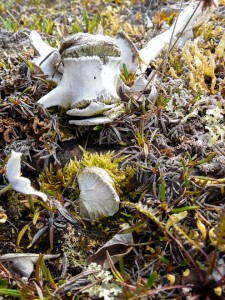 The simple acts of scanning my surroundings, inspecting freshly turned up tundra, and appraising possible campsites guide me across the threshold between fearful and mindful. Fear is a useful tool but too often stymies intimacy. When turned outward, fear becomes insight, enabling one to focus entirely on the present.

The second day, clouds gather above Three Sisters, seeming to bring evening to the perpetual day. I will sleep on the east side of the Itkamalik River. The valley is wide but my camp choices are narrow. Ahead, who knows how far, is a flat bench between tussock and talus, and I aim to make this the day’s goal.

It is liberating to be in a wilderness without any development, but with this freedom also comes uncertainty. Maintained trails, level tent pads, outhouse pits: these all lead us through the terrain easily and efficiently. As I near the bench, more inviting with each step, I realize that even here I am being led – not by a trail or established route but by the land and its inhabitants. While in the arctic, Terry Tempest Williams noted, “If we listen to the land, we will know what to do.” I am rapt with attention.

A low woof. A flash of blonde.

The bear, platinum and glowing in the northern light, is up the steep talus faster than I thought possible. Small rocks ping down the fall line. A subtle track leads from me to him, from him to me. We both look back, bodies pointing in opposite directions, heads turned towards each other. Pause. I walk away from the bench, from the camp that was perfect for bear, perfect for human. I turn again, and he is almost at the top of the ridge, watching me. On cue we release from the scrutiny of the other, both satisfied with mutual apprehension. 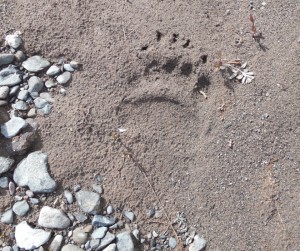 There is a long history of close association between humans and bears – a myriad of stories tell of bear becoming human, human becoming bear, wrapped up in a marriage invariably at odds. We want to be within reach of bears and yet safely apart. In their book The Sacred Paw, Paul Shepard and Barry Sanders describe bears as “a kind of ideogram of man in wilderness”, reminding us of our alternate selves.

That evening, I finally set up camp in a meadow held by a bare cirque. I wonder where the bear went, if he will also bed down and whether I had given him enough warning. The fact that he and I were attracted to the same place makes me grin, but does not diminish my gratitude for 24-hour daylight. Like any animal, I want an unobstructed view.

The next morning, as I am making coffee among boulders, the bear gives me a gift. For the next three hours, oblivious to or unconcerned with my presence, I watch him wander the valley. He digs up tundra hunting for squirrels, crosses the river, is swept downstream, emerges frantic and shakes water off of his back. He continues to sniff his way up the other side of the valley, moving steadily. It surprises me that he is climbing so high, into terrain that doesn’t look to be calorie rich. But my motivation is different, too. After I lose sight of him, I climb up a loose rocky slope to the ridge on my side of the valley.

The openness of the tundra evokes something other than a sense of insignificance amid a vast landscape. I am very likely the only human in this valley, or any of the valleys beyond and yet, as I fight to stand upright in a gusty wind high above the river, I feel an exceptional connectedness. Later, during the arctic night, I wake briefly, unzip the door to my tent and peer through binoculars. I do not see my neighbor but fall back to sleep knowing that the bear and I share this valley.

We meet once more on the other side of the pass. As I make my way along a snow-fed creek, a sudden breeze carries my scent down-valley. A blonde head appears between boulders below me, and we once again perform a choreography of mutual respect. I give him space and slowly circle my way back toward the notch in a ridge that will funnel me into the next drainage. It is clear we will not meet again. 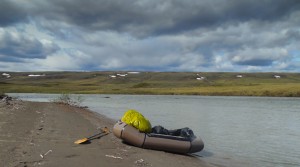 Eventually, I descend to Itkillik Lake and early the next morning inflate the packraft. It is a relief to let river’s current lead me. Hours later I recognize the shape of Jade Peak, and for the last time, fold the raft into my pack. It is already late in the day, and so after the longest bog slog I’ve ever experienced, accompanied by the newly hatched mosquitoes, I stand on top of Jade, just above Toolik Lake. A resident peregrine wheels above, a semi-truck kicks up dust on the Dalton, and somewhere behind me, a platinum blonde bear makes his way across the tundra.

I took this trip into the northern reaches of the Brooks Range because I wanted my perspectives to be challenged, to reexamine long held anxieties, and to explore a rare wildness. This experience was a dialogue about how to be at home in the world: an openness to fear, a grasp of limitations, and an attentive spirit. It is the language of humility.

Though she tends to wander, Abigail Sussman still considers Whatcom County home. As a kid, she enjoyed Choose-Your-Own-Adventure books and considers reading the landscape an extension of the same pleasure. For more stories and publications check out: abigailmsussman.com