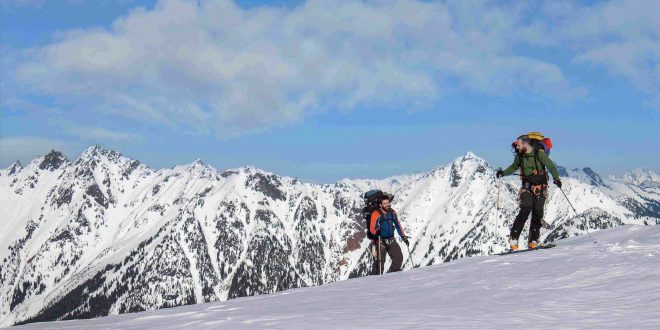 Anyone who has driven up the Mount Baker Highway to Heather Meadows knows that Mt. Shuksan is hard to ignore. This spectacular mountain rises over 7,700 vertical feet from the North Fork of the Nooksack River in less than three miles, radical topography even by North Cascades standards.  Icefalls cascade down from her northern flanks and the summit pyramid towers over an epic plateau of gleaming ice. Mt. Shuksan transfixes everyone the first time they see her up close. First-time ski area visitors sometimes assume that Shuksan is actually Mt. Baker, because why on earth wouldn’t you name the ski area after THAT MOUNTAIN RIGHT THERE?

Shuksan also gives an immediate impression of ferocity and steepness. Even experienced  climbers looking at the mountain for the first time wonder if there is a safe and moderate route to the top (I know I did).  And, in winter?  Avalanches and spindrift regularly course down Shuksan’s precipitouis slopes, and ski area regulars know that the mountain can be locked in winter storms for weeks at a time. No thanks!

But familiarity has a way of expanding the possibilities, a benefit to those who live near the intimidating peaks of the North Cascades. I first climbed Shuksan in the summer of 1999 (via the Fisher Chimneys above Lake Ann), and have returned every few years, sometimes to a different route or side, sometimes on my splitboard to speed the way in and out. Fast forward many years. I’d climbed Shuksan numerous times and spent many winter days around her flanks observing how the mountain responded to storms and the eventual breaks. A winter ascent began to seem like something not to be dismissed out of hand.

Winter climbing in the Cascades is a waiting game; windows with good climbing conditions and, most importantly, safe avalanche conditions, are few and far between. Which begs the question, what exactly does a winter “window” look like? This varies by the climber and the particular route and mountain, but ‘Team Shuksan’ (Chad, Kit, Gord, and myself) needed at least three days of clear weather and a Northwest Avalanche Center forecast of ‘low’ or ‘moderate’ at all elevation bands. The short days of winter meant that we were planning on a two-day climb, and it is always a good idea to leave a bit of space before the next storm in case an injury slows the team or requires a rescue. Our plans were loose. In some years it seems that there isn’t a window at all in the heart of winter, or at least one that aligns with home and work calendars. But at least there is usually good skiing to distract!

But that rare window did materialize midway through the winter a few years ago. Chad was visiting from southeast Idaho, and Kit, Gord, and I were interested in showing him that the Tetons weren’t all that great, at least compared to the North Cascades. We handled all the logistics and gear, leaving Chad blissfully unaware of what he was getting into. That is until we all piled out of the car at the White Salmon sno-park and pointed to our objective, bathed in early morning light. I’m pretty sure Chad gulped but he didn’t show any reluctance.  Gamely, he began getting his pack ready for the trudge ahead.

We headed out of the White Salmon Base Area (elevation: 3600 feet) on a descending traverse towards the head of the White Salmon Valley. During the depths of winter, this cirque is nearly in perpetual shade, and as the morning wore on, we labored up towards the White Salmon Glacier, hurrying through the danger zone below the Hanging Glacier. We nervously eyed the tracks from Hanging Glacier seracs (large blocks of ice) that had fallen thousands of feet down the mountain, hoping that the next salvo didn’t run any farther down the valley. On the way out of the ski area, we had run into the one and only Daniel Helmstadter, a Cascade legend with many first descents to his credit. Now we could see him far above us, expertly weaving a skin track up the glacier (skinning is a way of ascending uphill on skis using ‘skins’ that stick to the base of the ski, providing traction).

Dan saved us the effort of setting our own skin track, making it easier for us to avoid crevasses and slopes that were too steep. We each fell into our own rhythm, taking breaks occasionally to marvel at the view, the weather (nearly windless and barely freezing), and our luck with the stable snowpack.

About five hours after leaving the car we popped out into the sun at the top of the White Salmon Glacier to the gloriously flat ridgetop at 6700 feet that would be our home for the night. It was so flat that we didn’t even need to level a spot for the tent!  We would leave all our overnight gear here while we attempted the summit the next day. As the light waned, we settled into the winter routine of melting snow for drinking water, stamping our feet to stay warm, and wishing the sun to stay above the horizon for just a little bit longer.

The next morning, we were reluctant to leave our sleeping bags until the sun came up, even though the short days of winter meant that we didn’t have time to waste. The ascent started with a skin up and across the Upper Curtis Glacier (ski crampons useful), taking our skis off to boot through Hell’s Highway (less ‘hellish’ in winter than summer, i.e., not as broken) to reach the mellow slopes of the Sulphide Glacier a thousand feet above camp, which we followed to the summit pyramid.

Dan had kicked some great steps the day before that made it significantly easier for our team to ascend the icy 800 feet of 45-degree snow gully to the very top. Unlike him, though, we left our skis at the base!  So we ended up belaying (using a rope to protect both the leader and follower from a long fall) a short bit from the gully to the summit ridge, where the angle and exposure increase significantly for the final few feet to the rime-encrusted summit rocks.

What a view! The summit of Shuksan never disappoints on a clear day, but in winter, the view is hard to describe. Ridges upon ridges of jagged peaks plastered in snow and ice stretched out north, east, and south. Over a vertical mile below, to the west lay the ski area parking lot and the bustle of a busy day on the hill. Chad was suitably impressed! Naturally, we had the summit to ourselves but couldn’t stay long with all the technical ground to cover on a short winter’s afternoon. Carefully, we backed down the summit gully (facing in with crampons and ice axe) and returned to our skis at the base of the summit pyramid. Instead of exactly retracing our route from the morning, we kept heading counterclockwise around the summit pyramid, traversing the upper slopes of the Crystal Glacier until we could complete a short climb to the top of the Hanging Glacier, where we stripped off our skins for the fast—if a bit firm—ski back to camp. Shuksan’s unique shape allows for this high-level orbit, made even more efficient on skis.

Packing up camp went quickly, and soon we were faced with the unpleasant ski down the very firm White Salmon Glacier with full packs. Great climbing conditions but generally poor ski conditions had become a theme on our trip. Unfortunately, this is to be expected on the large peaks of the North Cascades during good (safe!) winter climbing conditions. But what is lacking in snow quality is usually made up for by the outrageous views along the way, making the lack of perfect turns an easy pill to swallow.

As dusk fell on the final climb back to the car, I found myself already thinking of other winter objectives for the future. What would the summit of Mt. Baker be like in the dead of winter 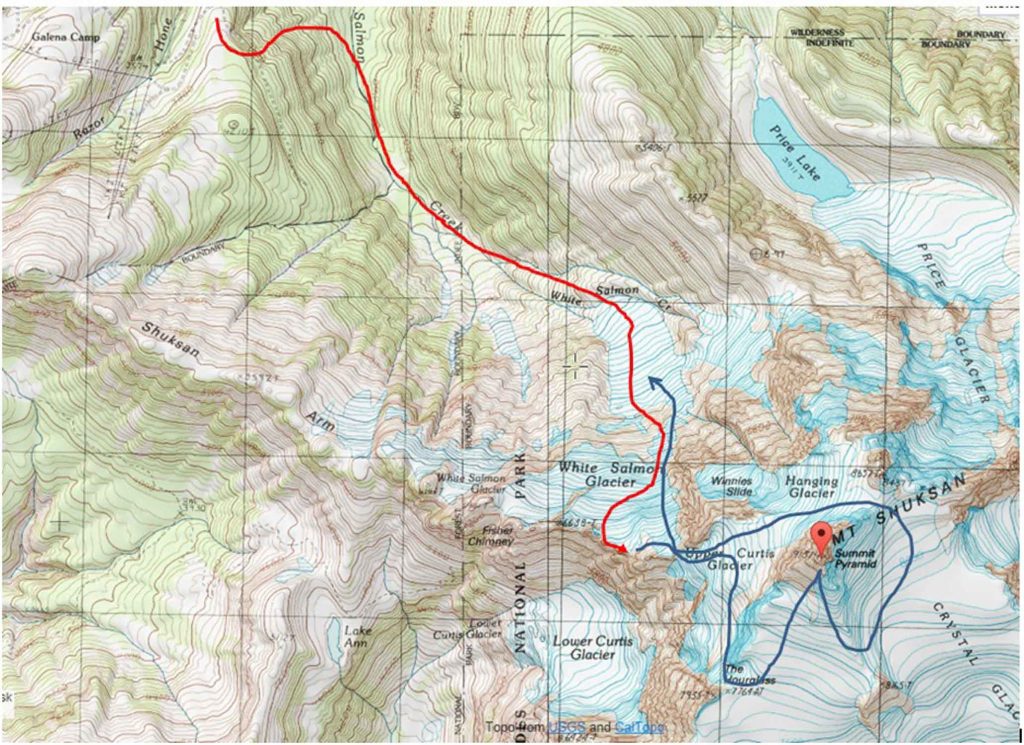 Know Before You Go

It is essential to check the current avalanche report at nwac.us/avalanche-forecast before venturing into the backcountry in winter.  Even with a good forecast, safety gear is a must-have, including a beacon, shovel, probe, avalanche airbag, and emergency communication device. Avalanche safety courses are available locally at American Alpine Institute and Baker Mountain Guides and might just save your life. 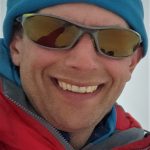 Jason Griffith is a fisheries biologist who now spends more time catching up on emails than catching fish.  Regardless, he’d actually prefer to be in the mountains with friends and family.  Jason lives in Mt. Vernon with his wife and two boys. 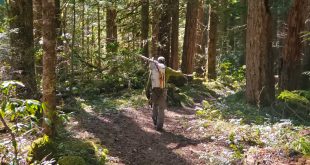 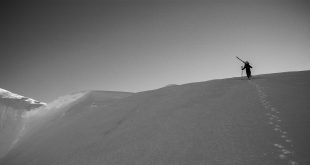 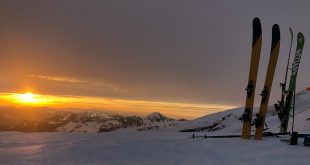