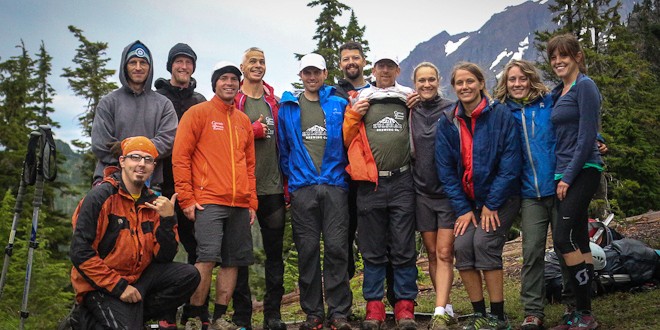 The Return of the Mountain Runners

“It’s not what you look at that matters, it’s what you see.” –Henry David Thoreau

Where does inspiration come from? Some people find it in the books they read. Others find it through their dreams or during conversations with friends.

I’m no stranger to sudden inspiration. I once had an idea to run a marathon on every continent (after completing only one race of such a distance) that came to me over a glass of wine on a romantic, rainy evening. And that idea wouldn’t let me go until I made good on it.

As I sit across from Daniel Probst, both of us sipping on Trans-Porter beers at Kulshan Brewing Company in Bellingham, Washington, I watch his eyes sparkle as he tells me how his big idea materialized. In Daniel’s case, the inspiration for a new Mount Baker ultramarathon comes from three seemingly unrelated passions: An ultramarathon in Italy; his love for his native North Cascades; and the story of the first Mount Baker Marathon in 1911, as chronicled in the film The Mountain Runners. 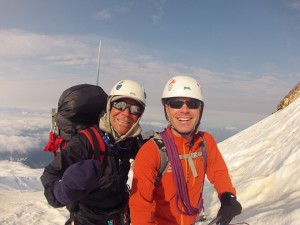 As a trail runner myself and as someone who was interviewed for The Mountain Runners film, I’ve been itching to find out more about Dan’s passion for reviving a race that would wind its way all the way from Bellingham Bay up to the top of Mt. Baker before turning around and coming back to town.

The seeds of the idea began, he tells me, in 2010 when Dan, an avid ultra runner, participated in the Tor Des Geants, a 206-mile ultra marathon in Italy that weaves its way through 34 mountain towns in the Valle d’Aosta nestled in the Italian Alps. The race was both spectacular and brutally challenging. Dan took 122 hours and 23 minutes to complete the course and crossed the finish line in the town of Courmayeur exhausted and triumphant. But it’s what Dan experienced of the race’s ethos—it’s community involvement and central purpose—that got his imagination running wild.

Tor Des Geants is the brainchild of the Courmayeur Trail Running Club. “They wanted to promote tourism in their region,” Dan explains. “They hoped the world would see the spectacular place they live in.” Specifically, the hope of the creators of Tor Des Geants was that runners who came to participate in their epic trail-running event would go back to the countries they came from and say, “You have got to get yourself to the Aosta Valley!”

In short, theTor Des Geants is about more than just putting on a first class ultramarathon. The goal is also to bring people from around the globe to enjoy the trails of the Valle d’Aosta year round.

I lean forward as he tells me this and take a drink of my beer. The millisecond when an idea emerges is a sacred moment for us humans. Those are instances that change the direction of our lives and that sometimes change the course of history. I wait for Dan to share his “Aha!” experience.

It happened like this: As Dan reached each aid station during the Tor Des Geants and saw how the race engaged full participation and enthusiasm from every town along the route – volunteers and spectators alike – an idea began to sprout in the back of his mind. We should have a grand race like this at home! “A race that would show off our home-grown beauty to runners, hikers, and horseback riders from around the world,” he tells me.

Indeed. I can only nod in agreement. Is there any better place to run than the Northwest?

So Dan came home from Italy with renewed vigor to continue to expand the trails in Whatcom County. The thought of putting on an ultramarathon that would bring people to these trails kept coming to him – something to dream about on long trail runs, if nothing else.

Meanwhile, in Whatcom County two other things were going on. First the film, The Mountain Runners, directed by Todd Warger and Brian Young, was in production. It told the story of the epic race run in the early 1900’s that started in Bellingham, turned around at the top of Mt. Baker, and wound its way back to Bellingham. The film (which eventually debuted in 2012 and has subsequently played to wide-spread acclaim at film festivals around the world) highlighted the spirit of a race developed to show off Whatcom County and to draw people north for tourism.

Dan Probst watched the film with interest. The intent of the Mount Baker Marathon of old wasn’t much different in its intent from the Tor Des Geants. What Dan had been conceiving of had already been done – a century ago.

The other thing happening around the county was that a much-anticipated land transfer, (also known as “the reconveyance”) would soon be returning 8,884 acres of land to Whatcom County, making the acquired area one of the largest locally-managed parks in the country. As a life-time local, Dan saw the reconveyance as a chance for recreationalists like himself to really enjoy the gorgeous land that wraps itself around Northwesterners every day. Maybe, he said to himself (and to several other people, too), a long distance run could even pay for some of the trail-building that would allow for people to enjoy the land year-round. It would also highlight opportunities for like-minded trail-builders to volunteer their efforts.

Henry David Thoreau, the great naturalist, said: “It’s not what you look at that matters, it’s what you see.” And what Dan Probst saw was an increasingly clear vision. It was, indeed, possible – and desirable – to renew the Mount Baker Marathon, to create a continuous path that travels from sea to mountaintop. One that will bring runners into the area so that, in the spirit of the Tor Des Geants, word would spread that there was great beauty and nature available to enjoy in the shadow of our majestic mountain.

“The more I have talked about the idea, the more possible it has become. Almost everyone I discuss it with is interested and willing to join the process of making it happen,” Dan says, shaking his head and smiling. “This will be good for Whatcom County.”

Jason Martin, Director of Operations at the American Alpine Institute, showed his support right away, as did the members of the Mount Baker Club, the club credited for starting the original race. Many others have also been quick to catch the vision of what will be a 108-mile race (54 miles each way). I nod as I hear how the inspiration for this proposed race became infectious. I believe I’ve caught the bug myself. That’s how inspiration rolls. She seeps into the hearts of anyone who will listen and hooks them – pulls them into her cause.

The proposed path is an homage to the original Mount Baker Marathon. Dan describes it to me with rapt passion. He’s laid out a map in front of me, and I try to follow along as he describes it. The new course, the one Dan, Alex, Morris, and Dusty ran last August, begins at Cornwall Beach, follows Cornwall Avenue for a time, and passes the location of the 1911 Bellingham Chamber of Commerce to commemorate the old race. Next, the course edges by the current Chamber of Commerce near the historic Mount Baker Theater and then ducks behind Diehl Ford (in honor of Hugh Diehl who drove runner Joe Galbraith to Deming in the first race) before picking up the Whatcom Falls trail. After going through Whatcom Falls Park to Bellingham’s Northshore Drive, the route then catches the North Lake Whatcom trailhead and treks over Stewart Mountain. It then traverses through what will be the new Lake Whatcom Park before dropping down into the town of Acme.

The South Fork Park was the original Galbraith homestead, and the course passes by its location and then goes out Mosquito Lake Road to the Middle Fork Road (Forest Service Road 38) until it catches the original Mount Baker Marathon trail again at the old location of Heisler’s Ranch. Runners will then take the Ridley Creek trailhead into the Mt. Baker/Snoqualmie National Forest before getting on a trail that follows that up the mountain to Mazama Lake.

I have to catch my breath after this description. Dan only smiles and nods.

Dan finishes with “From Mazama Lake it’s only a half mile to the Easton Glacier. And from Easton Glacier it’s only one mile to Sherman Crater. Then the route turns around.”

“Sounds glorious,” I say, secretly wishing I was trained up to 108 miles so I could join Dan and his crew for the next trial run.

“We’ll run together sometime and I’ll show you how the race will start,” Dan says. I nod, planning to take him up on his offer.

What started as a dream is now a vision shared by The Cascade Mountain Runners, the American Alpine Institute and many others around Whatcom County. Such a race could raise the funds to maintain and mark new trails that can be used year-round by hikers, cyclists, runners, and others.

Shakespeare once wrote, “One touch of nature makes the whole world kin.” And as I swallow my last swig of beer and look across the table at Daniel, I can see that Shakespeare was on to something.

Those who most enjoy the beauty we have here in the northwest corner of Washington State want to share it with others in the spirit of camaraderie and open-hearted joy. A walking/running/horseback riding route that traces the landscape from the sea to the mountain peak is a brilliant invitation for nature lovers to touch the wild Northwest and, as a result, to become kin.

Learn more about the Mount Baker Ultramarathon at cascademountainrunners.org

Cami Ostman is the author of Second Wind: One Woman’s Midlife Quest to Run Seven Marathons on Seven Continents (Seal Press) and is a longstanding member of the Greater Bellingham Running Club. She is a writing-coach, family therapist, and the co-director of the Wind Horse Half Marathon (which raises funds for one of Bellingham’s sister cities). She lives in Bellingham, Washington.