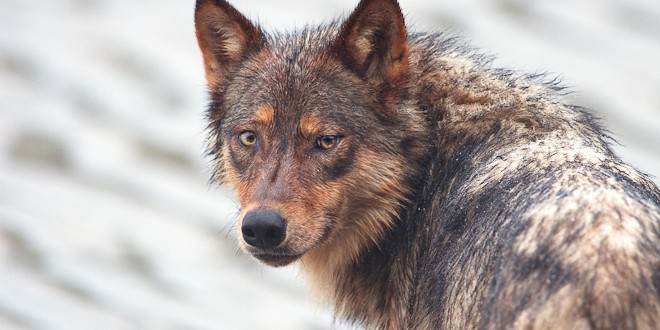 The Rewilding of the North Cascades: A Tale of Gray Wolves and Grizzly Bears

Grizzly bears roaming the hills a few ridges east of Bellingham? A pack of wolves on the hunt in forests less than 100 miles from downtown Seattle?

In a time of environmental crisis – a warming, overcrowded planet, ocean acidification, an ark’s worth of species on the brink of extinction – there is something amazing happening here in our own backyard: the renewed presence of rare, large mammals in the North Cascades.

The North Cascades are an international ecosystem that stretches from the Fraser River in the north to Stevens Pass in the south, and from the Okanagan highlands to the east all the way down to the shores of the Salish Sea. This ecosystem is defined by its complex and dramatic geology – the ways that multiple ice ages and glaciation have shaped the topography – and by the biological diversity that is a result of varied terrain, climate and vertical relief.

It is a landscape of superlatives: 15 peaks tower over 9,000 feet and another 300 rise between 7,000 and 9,000 feet; it’s the most glaciated region with the most vertical relief in the Lower 48; and the biological diversity is profound, including the largest concentration of bald eagles in the US outside of Alaska, many unique botanical communities and a host of rare carnivores, including lynx, wolverine, pine marten, bears and wolves.

What all of this adds up to – rugged and remote landscapes, lots of pristine habitat and varied ecosystems, robust federal protection – is a place where wilderness still has a chance to express itself, a refugium of the natural world that closely resembles what it was before Euro-Americans moved in.

“What’s so exciting about the North Cascades ecosystem,” explains local wildlife biologist Bill Gaines, “is that it is really rare to have such large connected wildlands and have the opportunity to restore a full compliment of large carnivores. There are few places in the Lower 48 that this is even possible, really only the Rockies and the North Cascades. Other places have a lot of wildlands but have to start restoration missing several pieces of the puzzle.”

Two pieces of this puzzle – gray wolves and grizzly bears – tell two different stories about the state of carnivores in the North Cascades.

Gray wolves were extirpated from Washington State by the 1930s through campaigns of poisoning, hunting and trapping. On the brink of extinction, wolves were given protection under the Endangered Species Act in 1973 when they were close to being wiped out across the US.

The troubled relationship between Canis lupus and Homo sapiens began a new chapter when the federal government reintroduced wolves in Yellowstone National Park and Idaho in 1995. Since then, wolves have steadily rebounded in the northern Rockies and surprised many people when they began being sporadically sighted in northern Washington State in 2005.

The first wolf pack with pups in the North Cascades was confirmed in 2008 in Okanagan County, marking the first time they have taken up residence here in more than 80 years. The past five years have seen a remarkable comeback for wolves in the Evergreen State. The 2012 census found nine packs with at least five breeding pairs in places including the Selkirk Mountains, the Spokane and Colville Indian Reservations, Wenatchee and Teanaway.

“Wolf populations can grow quite quickly once they establish a foothold in a landscape,” explains David Moskowitz, author of the recently published Wolves in the Land of Salmon. “ They have a high reproductive rate for a large carnivore. Young adults will either disperse to areas adjacent to where they were born or travel several hundred miles before settling down.”

These wolves are returning to Washington under their own power, which Moskowitz says is a good thing: “Allowing wolves to naturally repopulate is less expensive and less likely to trigger people who are suspicious of the government and its intentions related to managing landscapes.”

The wolves on the east side of the state have wandered in from Montana and Idaho, while the ones taking up residence in the North Cascades are from a different subspecies population found in the Coast Range and Vancouver Island of British Columbia.

“Ecologically, these BC wolves have adapted to the unique coastal rainforest habitat,” says Moskowitz. “This shows up in their behavior – traveling along shorelines and swimming between islands extensively. It also shows up in their diet. In some packs, salmon and animals harvested in the intertidal zone make up the majority of their diet at certain times of the year, compared to in the Rockies where deer, elk or moose are almost always the primary food source.”

The state has responded, rather quickly, by adopting the Wolf Conservation and Management Plan in 2011 “to guide recovery…of gray wolves as they naturally recolonize the State of Washington.” The goal is to have 15 breeding pairs spread out geographically across the state.

“Washington’s Wolf Management Plan is probably the most progressive and scientifically and socially well thought-out management plan of any western state,” opines Moskowitz. “Ultimately, I think the plan does a good job of attending to the variety of needs and interests of the people of the state. The biggest challenge now is to implement it fairly. If we do, it is very likely wolves will recover in the state, there will still be a huge livestock industry in the state, and people will still have ample deer and elk hunting opportunities.”

Grizzly bears, on the other hand, are just barely holding on to their foothold in the North Cascades. It is believed that between 10-20 grizzlies still roam the most remote corners of the international ecosystem, though hard proof has been nearly impossible to come by despite decades of searching.

There was once a thriving population of grizzlies in the Cascades but, like the gray wolf, they were systematically destroyed by trapping and hunting. High Country News reports that “by 1860, an estimated 350 grizzly bears survived in the Cascades, down from an historical population of around 1,000.” The last documented grizzly on the US side of the border was shot in 1967 in Fisher Creek basin, the heart of the North Cascades. Less than ten years later, they were recognized as a threatened species by the US.

Gaines has been studying Ursus arctos since the mid-1980s when he was hired to work on the North Cascades Grizzly Bear Evaluation Project. His survey helped determine the North Cascades as having outstanding habitat for grizzlies and led to the region being designated as an official recovery zone by US Fish & Wildlife in 1993.

But since then, efforts at restoring grizzly bears in Washington have stalled, primarily due to lack of funding.

Gaines continues to lead scientific expeditions into the far reaches of the ecosystem, searching for brown bears and mapping habitat. It’s an interesting paradox: he loves working outdoors in some of the most magnificent country in the world, but after more than 25 years, he has still not found the object of his quest.

“To date, based on thousands of DNA samples we’ve sent to the lab and thousands of photos, we have not been able to detect a grizzly bear in the North Cascades,” he explains. “While it’s been rewarding to put a pack on my back and go to work in places I love, it’s also disheartening to come up empty-handed in the search for grizzlies.”

It’s puzzling to him and other scientists because the North Cascades have lots of protected space, relatively few people and plenty of food.

“When I think about the North Cascades as an ecosystem, I ask ‘are all the pieces of the puzzle here to make the ecosystem whole?’” Gaines continues. “The grizzly bears are a piece needing more time and effort.”

Looking ahead, the North Cascades ecosystem, like all other irreplaceable wild places, faces several challenges. While there are several worthwhile campaigns underway to increase protections in the region, it will take monumental action to slow down the warming of the planet. Climate change is driving temperatures in the North Cascades steadily upwards, including hotter, drier summers and milder winters with less snowfall. More precipitation is falling as rain instead of snow, and the glaciers that stabilize the ecology in so many different ways are in retreat.

“In the last 50 years, the average winter freezing level has risen 600 feet, or around 12 feet a year,” says Jon Riedel, a glacial geologist with North Cascades National Park. “That’s huge and it impacts everything from when things bloom, when pollinators arrive, when birds migrate, the life-cycles of marmots and pikas. Climate change is not something projected to happen, it is happening now.”

Wildlife biologists are looking to habitat connectivity as one way to plan ahead for the changes taking place.

“As climate changes,” Gaines explains, “animals are going to shift ranges to adjust to a changing environment.”

The North Cascades have room to roam as well as natural corridors for the movement of animals.

Will wolves continue to reclaim their former habitats in northern Washington State? Can grizzly bears hold on without direct intervention from land managers? The continuing saga of Cascadian carnivores continues and it will be fascinating to see what happens next.