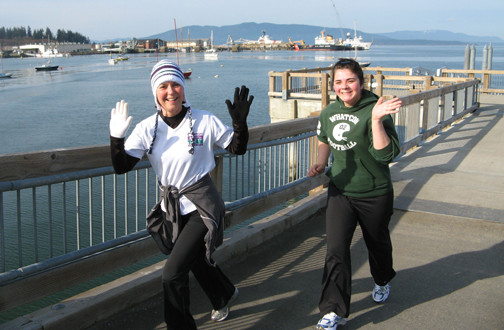 Running by its very definition is a selfish pursuit. People run to stay in shape, to stay sane, to lose weight, to be able to consume mass quantities of calories, for the medals and t-shirts, for the endorphins, or for a myriad of other self-centered reasons. More often than not a runner runs by him or herself and pursues his or her own personal goals. But, what happens when the selfish runner has an unselfish purpose? I attempted to answer that question when I signed up for a season with Team in Training (TnT), raising funds for the Leukemia and Lymphoma Society.

Feeling helpless after my father had gone through lengthy treatment for Non-Hodgkin’s Lymphoma I signed up for TnT. As a self-certified couch potato, overweight by about 70 pounds, I signed up for the Anchorage half-marathon thinking even I could probably drag myself through 13 miles. 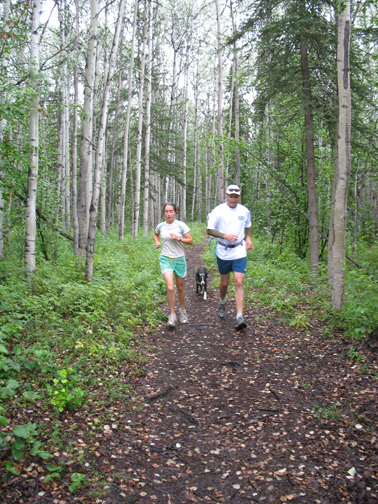 Our first week of training we were to run 40 minutes, starting at Redhook Brewery (which I took as a good sign, running and drinking, I could handle this). While the coaches introduced themselves I found myself shivering, from both the cold dark morning and the anticipation. The most I had ever run was from the fridge back to the couch so I wouldn’t miss the next episode of “ER.” We started out and I quickly gravitated to the nicest woman, who was exactly my slow pace. I had visions of the coaches having to wait for me to finish, checking their watches, annoyed at my slowness. So I was thrilled when I found out I was not the slowest one and there were other beginners like me. We finished the run and went out for breakfast. I could handle this. Well, the next morning I could barely walk. But, training for a marathon does not happen in one run.

Over the next several weeks I discovered a few things. First, how fast the body adapts to new challenges. I had been given the full marathon training schedule even though I was supposed to be training for the half. By the third or fourth week I was surprised I was running 8 or 9 miles, and I had optimistically figured if I could do that, I could do 26.2. So I dove right in and committed to running the full marathon. Second, I realized how many places in the Northwest I had never visited, despite being born and raised here. Our team met at places like Centennial Trail near Snohomish, Lincoln Park in West Seattle, Pioneer Park on Mercer Island, Seward Park in south Seattle, Discovery Park in Magnolia, Point Defiance Park in Tacoma. We trained through the winter and spring, and being able to—first-hand, through all the elements—experience that change in seasons gave me a deeper connection to this region. I was no longer just looking out the window during the commercial breaks. Third, how hills in this area can be a good thing despite the pain they inflict. Running up Queen Anne Avenue trained me well for my first marathon. When I encountered runners from Ohio struggling on some slight inclines in the marathon I had to smile as I passed them and thought, “hill, what hill!?” Fourth, how generous people are when they discover that you are doing something as unselfish as running a marathon for charity, and what a selfishly good feeling all that support garners. My fundraising was completed within two months, people kept on checking on my progress and telling all their friends and family what I was doing, and on the training runs people would shout out words of encouragement and the national team cheer: “Go team!”

That selfishly unselfish feeling came to a head for me as I was on mile 25 of my very first marathon a few short months and many training days later. A woman twenty-or-so yards ahead of me on the side of the course held up a sign that read, “Leukemia survivor, thank you!” Realizing that she had been out there for well over five hours in the chill rain of an Anchorage June day to say thank you to me and to support me and my team was almost unbearable in my emotional and physically exhausted state. I lost it. I started to cry. And as I passed her, she called out a powerful “thank you!” I told her she had to stop or I wasn’t going to finish the run.

Then, as I saw my TnT mentor coming around the corner to run me up that last hill, I started to cry again, this time at the sheer magnitude of what I had accomplished over the previous four months. I was within one mile of finishing a full marathon, had lost about 20 pounds, raised over $5,000 for the LLS, inspired so many around me, made a ton of new friends, and made my father that much prouder of me. 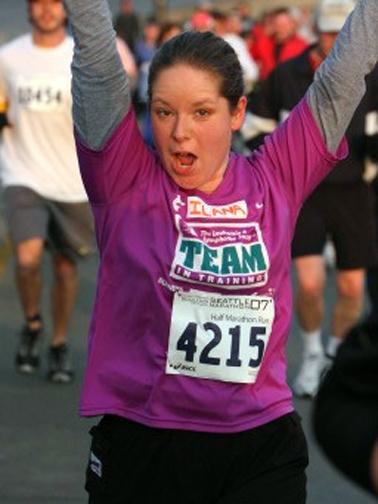 I have run five other marathons and one ultra marathon since then. Not all have been with Team in Training. One or two were to get a personal record, a few for fun, some just to stay in shape. While each race is an amazing accomplishment, those with an altruistic element—runs to give support to a fellow runner, runs for a good organization, runs to raise money for those in need— always feel a whole lot more significant.

So, what happens when the self-interested pursuit of running collides with the desire to change the world? For me I gained a new-found passion for running and for the amazing weather and trails we have in the Northwest; I became part of an instant community of runners and athletes (and now friends); I scored access to top-notch coaches who have helped me to best my marathon time by over two hours; and I have experienced the unique human knack for turning something innately selfish into a pursuit that benefits so many.