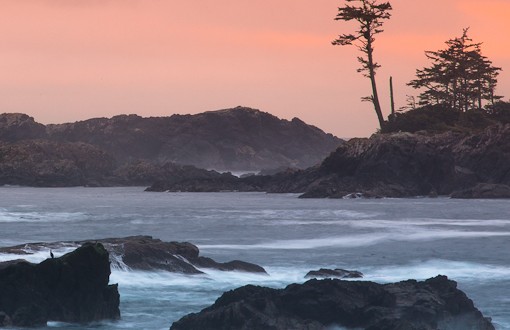 There is something about the edge of the sea.

The unbounded energy of waves crashing on sculpted rocks with its attendant deluge of negative ions, the wind-lashed trees, the profusion of life – aquatic, terrestrial and avian. In the Pacific Northwest everybody loves a walk beside the ocean. Accordingly, there is a plethora of well-known trails along these northern coasts  that traverse the spectacular edge of the continent and I consider myself fortunate to have enjoyed most of them.

A new addition, the Wild Pacific Trail near Ucluelet, British Columbia, may be the most beautiful coastal trail of them all.

The Wild Pacific Trail is an easy 10 kilometer walk (so far) – but allow plenty of time for stopping. The ‘Wow Factor’  is off the charts! The coastline here is awe-inspiring and the trail itself is a thing of beauty. The story of its creation is as amazing at the jaw-dropping views. It all began with Oyster Jim Martin, the visionary trail builder responsible for this extraordinary route.

Oyster Jim is an artist. His canvas is the Pacific Coast on the western edge of Vancouver Island. His brushes are shovels, chainsaws, a miniature front-end loader.

Oyster Jim (or OJ as he is known locally) is a master of composition. He has wound the route through the wind-tormented trees that crown the cliffs, framing a succession of jaw-dropping vistas, each unique, each a variation on a theme of awesome. He has taken down trees and judiciously pruned others, all to maximize the dramatic views.

How does one man create a trail? Jim describes himself as an “average guy” – which is true enough if you imagine ‘average’ to be synonymous with ‘super-human’.

It all started back in 1979. Jim had relocated from his home in Colorado to the hamlet of Ucluelet – literally, the end of the line in Canada. He found the laid-back west coast life style to be agreeable with his artistic and restless temperament. He prospected for gold, milled wood, did some fishing, became a shellfish farmer (hence the “Oyster Jim” nickname), whatever it took to maintain a foothold on the myth-drenched western rim of Canada.

In the course of these endeavors, he became a frequent visitor to the wild shoreline west of town, where he fished from the rocky headlands, a place that soon captured his imagination.

By the early 80’s Oyster Jim began thinking about constructing a trail along this epic coastline, a nearly impenetrable fortress of rain forest. The notion took hold of him. He began exploring the headlands in earnest, scouting out possibilities for a route, an effort that sometimes required crawling on his belly through the salal that grew ten-feet high. 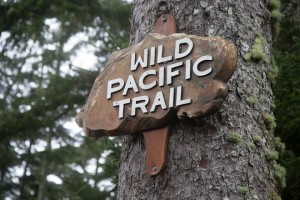 Jim is a passionate guy and he shared his thoughts with the community. Some folks thought it was a good idea – impractical but interesting. A lot of people thought he was crazy.

And there was a problem, a big problem: most of the land along the coast was owned by the Canadian timber giant MacMillan Bloedel (since purchased by Weyerhaeuser in 1999). Scenic trails were not their specialty.

By the end of the 80’s the timber industry, which had been one of the economic engines fueling Ucluelet, was in decline. So Jim sent a letter to Charles S. Smith, Head of Properties for MacMillan Bloedel, enquiring as to whether they might be interested in allowing him to construct a trail through their real estate. They politely declined. He sent another letter. They declined again. And so on.

But Oyster Jim was undeterred. He brought the idea of a trail to the District Council in 1988 and continued to work on MacMillan Bloedel’s Smith. It took 16 years but Jim finally got the go-ahead to build.

“In 1995 the economy in forestry and fishing collapsed, exposing the writing on the wall for this village,” Jim explains. “We needed a big asset. In 1999 the Lighthouse Loop [constructed on Federal lands] opened and the potential was realized. I had been crowing about ‘World Treasure, another Eighth Wonder of the World’ – all big talk – but now it could actually be realized, so in 2002 they [MacMillan Bloedel] agreed to allow a trail to be established on their property.

“Charles S. Smith deserves huge credit for his eventual support of the expansion of this trail,” Jim declares. “He had some prodding!”

Today, the Wild Pacific Trail includes 10 kilometers of tread that winds along headlands, beaches and through magnificent forests. A work in progress, it is hoped that one day it will extend north along the coast and connect with existing trails in Pacific Rim National Park.

The trail is unique in that it is the manifestation of one man’s vision. Oyster Jim has routed the trail not for expediency but to maximize the beauty of every step. Given more-or-less free reign, he has sculpted a route that accentuates the contours of this majestic coast, thinning trees and creating angles of view that inspire an artist’s soul.

“I take out trees, limbs and brush to frame all the views in a way to keep them ‘soft and pleasing’ to the eye,” he says. “I climb trees and scale cliffs to do whatever is necessary to clear the best view.”

The Wild Pacific Trail proper consists of three sections – the Lighthouse Loop, Artist Loops and Ancient Cedars/Rocky Bluffs section. The walking is easy throughout. Oyster Jim has deliberately built a trail that is so smooth and even that you won’t have to look down. He doesn’t want you looking at your feet. He wants your gaze to be lifted to the wonders that surround you.

The Lighthouse Loop was the first section completed. It offers up stunning views of Barkley Sound from the southern tip of the Ucluelet Peninsula, weaving its way above the rocky shoreline and through the coastal forest. It passes beside the Amphitrite Lighthouse, a west coast classic. Originally built in 1906 in response to a horrific shipwreck offshore, the lighthouse that you see today was rebuilt in 1915. A side trail leads to Terrace Beach, a First Nations site.

The Artist Loops are perhaps Oyster Jim’s supreme accomplishment. It is here that you can most completely appreciate his aesthetic bent. The trail winds along the shoreline through picturesque wind-twisted trees from one spellbinding vista to another, what Jim calls “streaming postcards.” Along the way he has constructed a series of small wooden platforms, just big enough for a painter and an easel (or a photographer and a tripod). Some of the platforms are mere steps down the trail from the last one but as soon as you step up onto them you can see that each one offers something unique: a new perspective, a different focal point.

The viewing deck that holds his “dedication bench” (as well as one for MacMillan Bloedel’s Charles S. Smith) stands above one of the wildest stretches of this wave-pounded coastline, a place of near-disaster for Oyster Jim. It was on the rocks below the deck that Jim and his son were caught by an immense sleeper wave, a pounding that left his son with nine stitches. Luckily, Jim says, they were not carried off the rock shelf, to “the meat grinder” below it. That would have been certain death, he says. Even on this relatively calm afternoon, one look at the frenzied surf and jagged rocks confirms his analysis.

The Ancient Cedars/Rocky Bluffs route offers a walk among mammoth red cedars and along some of the wildest surf-pounded coastline of the Wild Pacific Trail. Seals, sea lions, otters and eagles are ubiquitous. The end of the line is reached abruptly. This is where, if Oyster Jim has his way, the connector to Pacific Rim Park will branch off.

Today, the Wild Pacific Trail’s fame is spreading. It draws hikers, aesthetes and storm-watchers from every corner of the globe. Formed in 1999, the Wild Pacific Trail Society is a vibrant, passionate non-profit organization dedicated to promoting, protecting – and expanding – the trail. Donations are collected from enraptured trail users to help pay for maintenance.

And Oyster Jim can still be found most days out on the trail, constructing a new viewing platform or improving the drainage in a boggy patch. He is indisputably in his element. At 66, he shows no sign of slowing down and his infectious passion is undiminished. As we turn to leave, he immediately returns to the backbreaking work of setting the posts for a wooden railing that will create safe access to a new viewing platform. Oyster Jim certainly doesn’t shy away from hard work.

It is, after all, a labor of love.

Check out this video about Oyster Jim and the Wild Pacific Trail!