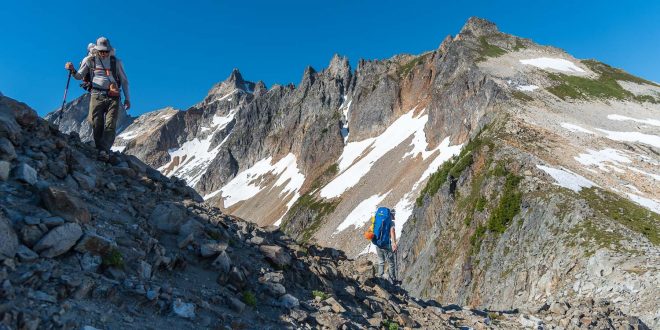 Images stick with me. I’ll often plan a trip around a specific place that I’ve seen either on a screen, a print, a slide, or just in my mind’s eye after looking at a map.

Frenzel Camp is such a spot, its draw powerful enough to compel a seven-day traverse from Goodell Creek to the Big Beaver Valley just to spend a few hours (well, a few more hours than planned, as it turned out) looking all around in wonder. The yin and yang of such trips, at least for me these days, is that they aren’t getting any easier. Some of that is age, some of that is self-induced suffering as a result of my unyielding determination to carry—in addition to my mountaineering gear— copious amounts of camera equipment. I had sworn that I’ll never do another seven-day Pickets trip, but…

The Object of My Desire

This one started like most—swatting bugs and dividing up group gear. My pack was way too large, as usual, but it turned out I did an even worse job than normal of packing food. This would be apparent on day seven as I packed probably four pounds of extra food out of the Big Beaver after spending the week trying to give it away. I really should be better at this by now.

Anyway, the pain began immediately…. and continued. By the time we reached the Chopping Block Col, I was thoroughly wrung out and cramping, trying my best to look as carefree as Tyler (who had climbed Johannesburg Mountain THE PREVIOUS DAY!).

I wasn’t fooling anybody though, especially myself. So, I went off to get water for the group and have a good cry (well, maybe on the inside, a little). Recomposed, I came back and volunteered to sample some of our whiskey supply. Much better.

The easy stroll the next morning started with some talus side-hilling and steep snow traversing that led to more boulder-hopping and a general team mutiny as we all sought a line that was superior to our teammates. Somewhere in the midst of this ego-driven mayhem,  we spooked a bear (surprising for all involved), met a party of impressive women headed to Mount Terror (“The Terror Twins”- not actually twins), and had some fun ascending the steep snow and “loosey goosey” rock to the Ottohorn-Himmelgeisterhorn Col. Whew.

Gearing up, we joked about who was going to lead the first pitch. “Not I,” came the reply from General Weakness (AKA me). Tyler gamely stepped up and promptly gunned us all to the false summit before we knew what happened, including a sparsely protected section of off-width that he exclaimed was “fun” as we all clenched our butts in solidarity. It was quite a climb though, and my hat is off to John, Silas and Russ for establishing such a gem on probably the best rock in the Pickets. Highly recommended!

Next stop was the object of my desire—Frenzel Camp—one of the best camps I’ve had the pleasure of staying in. It truly was a remarkable spot, surpassing even my vivid mental image. A patch of green, a tiny pool of water and a sky-full of jagged peaks. It’s hard to describe how these elements combine to achieve perfection.

Listening to the weather radio that evening, General Weakness declared that the next day the team would remain in Frenzel Camp to wait out a squall that was predicted to come through. Coincidentally, it also meant that the General’s load, which had to be carried over Outrigger and to the summit of East Fury, would get a tad lighter. Post-dinner activities that first night included feeling sorry for the Terror Twins who we could see having an unplanned (?) open bivy on the North Face of Terror. Tough ladies!

The General Gets Comfortable

The next day was spent lounging, watching the weather deteriorate, and keeping tabs on the Twins as they ascended up into the mists. Packs were lightened, whiskey stores reduced, and tired legs rested. It was a great spot to spend a weather day. That night, the forecasted rain and wind arrived and we were all glad that we weren’t up on the summit of East Fury. This was even truer the next day as the stormy weather continued to linger into the afternoon. Fearing that our chances for West Fury were fading, we opted to pack up in the mist and grope our way over to the summit of Outrigger just as the weather began to improve. It was still harder than it should have been to get off Outrigger and ascend to the summit of East Fury. The General arrived crabby and didn’t relish carving out a platform in the snow, melting snow for water, and generally having to pretend to be a tough alpine climber. Thankfully I had one of those bourgeois NeoAir mattresses to insulate my sorry ass from the snow and provide some much needed rest.

West Fury. Why? Well, why not? We were there, we had the time, and, as they say, “It must be climbed!” And so we did. It was actually a lot better than it looked from East Fury, but still took some time and a rope (if you’re partial to such things, as I am). It was about seven hours roundtrip, including about an hour on the summit.

And then it was down, down, up, down, and over, over to Luna Col and the comfortable camps there. At this point a weight was lifted from the team since it was all pretty much downhill from here and we were on friendly and familiar ground. Watching the sun set and chatting with a team headed to East Fury the next day was a very civilized end to a few days of ruggedness. The last few drops of whiskey sealed it—tomorrow we would set the alarms and watch sunrise from Luna. Because, why not?

Well, I could think of a few reasons when my alarm went off the next morning. But I gamely tried to forget all of them and struggled to keep Tyler in my sights as he streaked for the summit like a well-chiseled alpinist fired from cannon. I failed, of course, but arrived on the false summit in time to capture the scene pretty well with my camera. Like most places along our trip, though, pictures really didn’t do it justice. But no matter, the summit of Luna has 4G now (??!!) so you can pretend that the pictures you’re sending everyone represent EXACTLY HOW IT IS, RIGHT NOW. No wonder the Luna XC zone is full most weekends in high summer.

According to the weather radio at Luna Col, more rain was on the horizon so we broke camp and headed down into the head of Access (Axes? Pickaxes?) Creek. Again, this turned out to be a good move, validated in the morning when I awoke to find my mattress floating in a bass pond while rain pounded on the fly. Ahh, the glamour of mountaineering!

Access Creek was—of course—brushy and it was going to be wet. We were long out of whiskey by now, so it was going to be a character building descent which, in the case of General Weakness, might actually be just what the doctor ordered. We even found bits of a trail!  And a couple of large logs across the Big Beaver! And a freshly logged and brushed Big Beaver Trail! It was all just so reasonable.

Down at Ross Lake, we dropped our packs and enjoyed an obligatory dip in the lake and lazed in the sweet northern sun while waiting for the water taxi to come take us home. 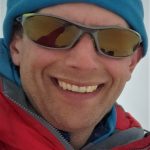 Jason Griffith is a fisheries biologist who spends more time thinking about the mountains than fish.  He lives in Mount Vernon with his wife and two boys. 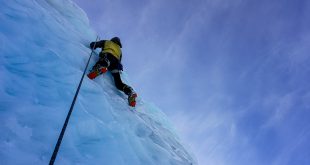 The Health Benefits Of Hiking