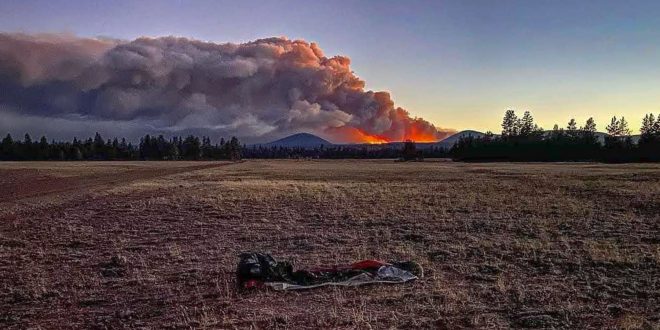 Five fire seasons weigh upon me. My knees, though they have only seen 24 summers, creak and snap with each step; my wrists, elbows, and shoulders crackle from having absorbed the shock of uncountable swings of my Pulaski into compact, dark earth; my feet bear the memory of miles, flayed raw. Five fire seasons in the Pacific Northwest, and my body is a different shape than when I started. But then again, so is the landscape.

When the Forest Service hired me in 2016, my duty station was in my hometown of Paisley, Oregon, where the Fremont-Winema Forest was our playground. On slow days, we patrolled the woods in our Type-4 engine, playing cards in shady campgrounds and visiting the various lookout towers to see if we could spot smoke on the horizon. I fought a number of fires that year, including the Pioneer Fire in Idaho, but on the whole, I had a peaceful three months before returning to college.

The summer of 2017 was hotter. There were more fires, higher temperatures, less precipitation, and longer days. I spent nearly all of July and August working with two local Interagency Hotshot Crews (IHCs)—Winema IHC and Lakeview IHC—on various fires across the west.

2018 was hotter still. In 2019, I accepted a position on Lakeview IHC and returned there for the 2020 season, fighting fires in Alaska, Montana, Wyoming, Arizona, Colorado, Washington, and Oregon. Yet, I did not return for the 2021 season.

If they stay in the business long enough, every firefighter faces a moment when they must confront their fragility. Some might hike a thousand miles over the course of twenty years and become close friends with the shadow of their mortality, while others hang their boots up at the end of their first season. I have stared into walls of boiling flame, gazed at old-growth forests bursting into radiant light before crumbling to ash, and felt the awesome power of pyro-cumulous storms collapsing around me. I have trekked through knee-deep ash pits lined with glowing coals, cut-down snags that could crush my soft body into a mess of pulp and bone, and felt the stinging hot rain of ember fallout against my face. Yet, through all my experiences, there has only been one day where my vulnerability was fully revealed against a backdrop of utter futility.

The Lionshead Fire on the Warm Springs Reservation began in August of 2020 during a lightning storm and was one of the dozens of active fires across the Pacific Northwest. A combination of too-few initial response resources, steep terrain, a high concentration of fuel loading and ‘dead-and-down’ on the ground, and temperatures in the mid-90s with strong diurnal winds quickly expanded the fire to several thousand acres.

Lakeview IHC fought the Lionshead on two different assignments, arriving the first time on August 25th after nine days on the Crane Fire near Lakeview, OR. Already fatigued, we spent a handful of days conducting hasty burnout operations using both aerial-ignition (our crew had a drone with aerial-ignition capabilities) and hand-firing before returning home for a couple of days to recover.

We returned to the Lionshead almost immediately to find our previous work had been rendered null and void by violent windstorms and aggressive afternoon pushes across miles of uncontrolled fire line. Shortly after arriving, the order came to prepare a road (create a fuel break adjacent to a road or other natural feature to be later burned out), and soon six saw teams were leapfrogging each other. Progress was slow as the saws had to contend with jack-strawed dead-and-down while battling the slope that threatened to tumble the teams down the mountainside.

The crew spent four days on four different roads. The Incident Management team in charge was indecisive, changing plans and strategies almost as often as the wind shifted directions. Finally, we received the order to conduct a highly complex firing operation at night. Other crews had finished preparing their lines, and a contingency plan was in place in case this burn-op failed. In addition, a red-flag warning was in place due to extreme winds from the east (a common factor in the explosive growth of many of Oregon’s largest fires) and low relative humidity recovery overnight.

Gibilisco, the captain of our crew, selected me as one of the four burners, and I grabbed a drip torch. The plan was simple: in a staggered formation about twenty-five feet apart, we four burners were to put fire on the ground and let it burn the underbrush in a controlled setting. The strategy was such that, by burning the understory, we would create a fuel break between the road and the main front of the fire, thus robbing it of energy and hopefully slowing or stopping its progress. We had completed dozens of burnouts exactly like this one earlier in the season, but I was uncomfortable because of the winds. However, since we were on the southern front of the fire, I figured the east winds would simply push our burn parallel to the line and into the base of Mt. Jefferson. I was wrong.

The burn began as planned, the holding resources stretched out behind us (they kept their backs to the fire, constantly scanning the unburned forest to the south for spot fires from falling embers). We had completed nearly two miles of the intended four by 9 p.m. Gibilisco swapped me and the other burners out with fresh crew members to give us a break, and I dropped my pack to grab a snack and rehydrate before taking my place among the holding resources. Then, bent over my pack with my headlamp on, I noticed the dust and smoke swirling past my face change direction. The wind had switched.

A halt was called to pause the burn-op, but it was too late: a stand of fir trees ignited, torching out with flames over one hundred feet high, and I watched with dismay as thousands of firefly-like embers crossed the line into the valley below the road. In minutes, dozens of spot fires were roaring in the area we were trying to prevent from burning, acrid black smoke was billowing in all directions, and visibility fell to a few feet. The radio on my hip squawked.

“Lakeview, Division Bravo.” The Division Officer (the fire staff in charge of the entire operation) was calling Mugz, our crew supervisor.

“Hey Mugz, any chance we can pick up those spots?”

Mugz took half a moment before responding in a few terse words. “None. It’s gone.”

“Okay. Let’s get everyone pulled back to the safety zone and cleared out.” Division sounded upset, almost like he wanted to cry. I realized that he was likely as exhausted as we were. As everyone was.

Mugz called the crew channel on the radio and gave the instructions for us to pull up the road to the safety zone at the halfway point of the burn. I joined my fellow crew members from further down the hill as they marched past, and we arrived at the safety zone in a few minutes.

A dozer had cleared an area larger than a football field down to bare, mineral soil; dusty, volcanic silica. The wind was blowing from the east again but frequently shifted towards the south, sending smoke and choking dust swirling into our eyes no matter which direction we faced. Standing there in the ankle-deep dust, we watched the fire roar past on three sides and into the Mt. Jefferson wilderness. Firefighters who survive being burned-over describe the sound of the inferno as a freight train rushing by mere feet from them. We weren’t burned over, but there was enough fire that all sound disappeared beneath the waterfall-like howl punctuated by the deeper crashing of falling trees.

The east-wind event that vastly complicated and ultimately fouled our burn operation impacted wildfires across the Pacific Northwest. Numerous towns were completely, or nearly, destroyed; fires grew to astronomical size in a matter of hours, pushed by the hand of a relentless wind. Resources were stretched to the breaking point. Within a day of our failed burn operation, the Lionshead Fire burned around Mt. Jefferson and the Beachie Creek Fire and the P515 Fire, which were responsible for razing the towns of Detroit and Gates, damaging multiple other communities, and killing at least five people.

The next day, I watched as the Lionshead merged with Beachie Creek. Their double-headed column darkened the sky as far as I could see to the west, pouring smoke into the Willamette Valley. I could see dozens of additional smoke columns to the north and south as other fires chewed up the landscape.

Five fire seasons weigh upon me, though at times, I am almost without their weight. On that ridgeline, however, I felt every ounce of their burden. With destruction reigning absolute on the horizon in all directions, it seemed the entire West was on fire. It burns still. 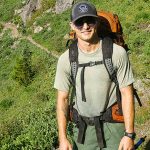 Camden Michael Jones is a 24-year-old wild land firefighter turned high school STEM teacher. When he isn’t playing with fire, he can be found hiking around the Pacific Northwest, working out, trying new recipes, or yearning for more tattoos. He currently lives in Condon, OR with his wife.