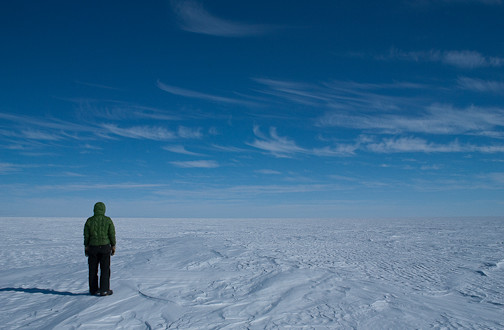 When I walk a trail, wander the silty perimeter of a river, or weave through a snow bound forest, I spend much of the time looking down. I’m not particularly clumsy, nearsighted, or interested in my boots. I am looking for animal tracks. The physical acts of observation: tenderly tip-toeing over the imprint of an elk’s passage, kneeling to compare bear prints to my own, or tracing the Braille left by a marmot are as reflexive as dodging a low hanging branch.

So when I took my first walk outside of Byrd Surface Camp, a remote field site on the Western Antarctic Icesheet, I was repeatedly deceived by wind generated patterns, obscured skidoo marks and the faded shape of boot soles. This mistake was more jarring than the other constant evidence: perpetual daylight, incessant wind, cutting cold.

When I accepted the General Assistant (GA) position with the U.S. Antarctic Program, I was in the midst of my usual seasonal park ranger gig in North Cascades National Park. Dense undergrowth, wide rivers, diverse wildlife—I understand how to move through this world. Why would I, as one forthright friend asked, want to live in a tent with a bunch of strangers in the coldest place on earth? I wasn’t going to make a lot of money, I wasn’t working towards a PhD, and I wasn’t embarking on a mountaineering expedition. I was going to shovel snow.

Despite my friend’s skepticism, I filled out lengthy applications, endured extensive physical exams and sat through mind-numbing training sessions. In October, I strayed from the usual seasonal progression and went from boreal fall to austral spring and found myself in a surprisingly substantial emptiness.

Before going to a new place, one might ask for a suggestion list from a friend, read a Lonely Planet guide, or research itinerary ideas on the internet. There is a general understanding of what to do at a destination: trekking in Nepal, visiting Machu Picchu in Peru, slickrock in Moab. Though I was able to collect advice from friends who had been to Antarctica, there was really no way to prepare myself. I just had to go and know that I would enter another world.

I was not alone in the middle of the icesheet—in fact, I had never before been in a wilderness with so much and such varied company. Byrd supported a rotating cast of soft-handed pilots, ice-coring geologists, a World Beard and Mustache Championship-winning GPS technician, hard-working carpenters and graduate student lackeys. Camp staff was a hodge-podge: a Public Enemy-loving French trained chef, a sixty-something rancher from Saskatchewan, a sprout-pushing midwife, a black, gay man who preferred smoothies for breakfast and was secretive about his former job at the Pentagon. These people become my confidants, my adversaries, my providers. Without natural habitat, community transformed into ecosystem. In the same way, clouds became mountains, shadows became color, absence became a powerful presence.

When I am climbing a ridge, walking a canyon, or resting on the banks of a wild river, I am surrounded by other lives and histories that give my own an unmistakable context. I feel at home when I can anticipate which blueberry patch will bear first fruit, when the salmon might find their way upstream or how the snow will melt as the summer progresses. It would be disingenuous to say that I, or anyone, can feel at home on the icesheet because intimacy with this land is impossible. In the absence of animals, plants and topography, we turn to each other to remind us of who we are.

For much of human history, place defined culture. Climate, terrain, vegetation, and wildlife determined diet, type of shelter, clothing, and social interaction. Phenomenologist David Abram asserts that “we are human only in contact, and conviviality, with what is not human.”  He is referring to both the animate world – salmon and bear, cedar and huckleberry, chanterelle and kelp and also the inanimate – rock and wind, rivers and rain, clouds and sunlight. At first, my new home seemed like a simple unwavering void, a perception that was rapidly displaced by the understanding that ice and absence are in themselves strong and complex personalities. The emptiness is imagination. Like the mind, the flat white contains nothing and everything.

To take in the icesheet, one must give up the fullness of the rest of the world – to let everything go and yield to nothingness. It is not easy to let go. Indeed, what is the difference between letting go and giving up? Both are acts of release, both imply loss, both necessitate a shift from this to that. Perhaps giving up suggests a sense of control over a situation, a choice, a decision, a preference. I did not give anything up because I had no say in the matter. I was forced to let go because the ice commanded it.

I went to a placeless place where cardinal directions are meaningless, where my usual tools – compass, map, surrounding terrain – are useless, where perceptions are senseless. Antarctica is a continent of contradiction, an antipode, a shadow. Though it is impossible for the ice to support a habitat, the flat white does indeed define her temporary inhabitants. Just as the culture of the Salish Coast is determined by abundance, human presence in Antarctica both reflects and is reflected in the paradox of  human nature.

Byrd Camp was supplied not only with -60°F sleeping bags, personal cold weather gear, and specialized heating stoves, but also grass-fed New Zealand beef, a snow melting system and a stationary bike. Our camp supported a variety of scientific inquires with foundations in climate change – and everything was delivered by an aircraft that averaged three miles per gallon. We slept in unheated tents at -20°F and drank fair-trade organic coffee. A rare appearance of a snow petrel was both a joyous event – an animal!- and a funeral, as this bird blown off course by a storm would likely perish. We weren’t just surviving, we were comfortable. This made it easy to mistake life on the icesheet as a somewhat plausible endeavor. On calm mornings I would kick and glide to the end of the ski-way, a three mile long swath of groomed snow that serves as landing strip. This is the furthest I could go from our pop-up tent city and it is here that I feel the pull towards the unending horizon and understand an obvious truth: this place is not for us.

To be in an indifferent landscape demands one’s full attentiveness – unable to turn my back on what is at hand, required to relinquish the past and future, incapable even of conjuring the world beyond the horizon. It was a liberation, a relief, a respite from the existential tight-rope of what-then-what-will-what-now. For me, being nowhere was an exercise in the often mentioned but rarely achieved state of being now-here. This is the terrain of our honest selves. I did not belong here in the most fundamental of ways and yet I was at home in my own self for the first time in a long while.

I am drawn to places that overwhelm the human compulsion to modify, terrain that does not bend, landscapes that will not abide reshaping because this is the real world – the world that lives whether humans reside within it or not. Knowing that these parts of the planet exist is reassuring because it signals the genuine nature of place, which is never anything but the way the land is framed against the sky. It is what it is and there is no interpretation needed. So it should not come as a surprise that in this emptiness I was able to stop questioning my place in the world and just live within it.

Most everyone who works for the U.S. Antarctic Program (USAP) is stationed at one of three permanent stations: McMurdo, South Pole and Palmer. Aside from folks heading to Palmer, located on Anvers Island near the Antarctic Peninsula, all staff and scientists arrive at McMurdo from Christchurch, New Zealand. With the largest population on the continent (summer high of 1100, and a winter community of 150), McMurdo is a close knit community, an international airport and an industrial hub of emerging science.

A cluster of buildings and fuel storage facilities, internet and high-tech science labs, bars and movie nights, one can read the New York Times online, check email or make phone calls with no more difficulty than figuring out time zones. There is yoga every Tuesday and Thursday, music at the coffeehouse, a library, a climbing wall, even a network of hiking trails.

If it were not for the combination of creativity, intellectualism, and adventurousness inherent in a citizenry made up of dishwashers with MFAs, eminent scientists and stalwart mountaineers, Mactown would seem like just another ocean-side town where the ocean just happens to be frozen and the ubiquitous “Big Red” jacket replaces swimwear.

The amount and variety of research being conducted on the continent is staggering. The National Science Foundation and USAP work with an outside contractor to maintain, support and fund all U.S. based science on “the ice”.  From McMurdo, some science and support teams are flown to various field sites, from small camps in the Dry Valleys to larger camps on the icesheet which serve as way-stations and bases for research further afield.

For more official information and to check out the live webcams at McMurdo, South Pole and Palmer, go to www.usap.gov